Sunday morning we left Yorkshire, turned in the car at York and after one canceled train and another train delay, close to noon we finally boarded a train to London. We visited Harry Potter’s train platform, bought an Oyster Pass (Chad had lent us one already from his last trip) and headed down into the tube to ride to our hotel. 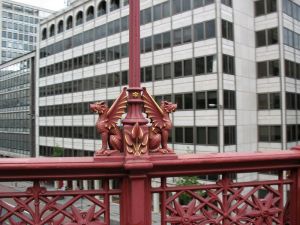 We headed to St. Paul’s cathedral; this is a cool bridge near Old Bailey. 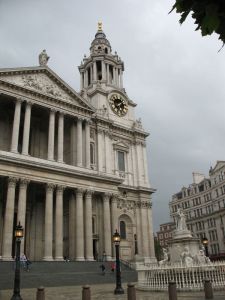 We were hoping to catch evensong. We missed it, so after looking quietly at the cathedral from out seats (it was Sunday–no sightseeing) we headed out in the rain. Tired tourists, we were hunting for something to eat that didn’t require us to trade in one of our children as ransom.

We ended up at an Indian restaurant. The sole waiter was listening to Wimbledon on the radio, a nice clash with the wailing Indian tunes in the background. It was a rather skimpy meal for the price. We both balked at one piece of nan bread costing 2 pounds. When we commented that in the States we’d get at least two pieces for that price, he said, “Well, you are in London.”