Let’s talk food: Munich, specifically. Given the readership of this blog, that shouldn’t be too hard, as you all like food and partake in it daily.

We come downstairs the first day and this sign, hanging over the fresh breads section, is an invitation. We accept, and proceed to our nice day, by starting here.

We pick a corner table, put down our room key so they can track us, and head back to the buffet.

And juice. They have three kinds of beverage on the juice bar: apple, orange and plain old water–a rare commodity around here, so I have to mention (see Drinks, later on). You can also select from their extensive list of teas (no thanks), hot coffee (ditto), and hot chocolate. My languages are all meshing in my mind so I continually call it “chocolate calda,” a mash-up of what I remember from Italy.

The sausage links are not like the States’ version. Ours are mostly grease tasting, with some flavor. These are all flavor, subtle and not earthy, and with a finer texture (no small pellets of ingredients to waylay you).

The following are pictures of their main breakfast buffet. To the left are pastries–in this case, strudel, which I haven’t seen since that first day.

The weird part of the buffet, of which I never eat includes shrimp in some sort of white mayonaisey sauce, salmon, marinated olives, peppers and fish salad. The yellow round things are chunks of butter and in the lower right are soft cheeses with a variety of outside coatings: herbs, peppercorns, etc. I have tried those. 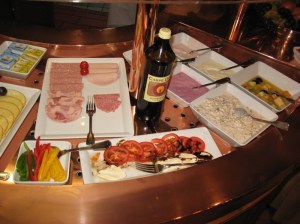 The middle part, with fresh peppers (here they call them paprika), a caprese salad (tomatoes and fresh mozzerella–I guess they’re making the Italians happy, but I never had that for breakfast in Italy!), sliced ham, meats and cheese slices. On the right is oatmeal, and past that is the fruit compote. Above those are two kinds of yogurt. Are you feeling full yet? Obviously there is a possibility of gluttony here; instead, on that first day, we merely overate. We haven’t eaten that big of breakfast since.

And the Grand Finale! Weisswurst on the left, with some other kind of unnamed wurst (sausage/brat variety) and on the right, bacon (almost gone–it’s popular) and the breakfast sausage.

Weisswurst is a Bavarian specialty, usually served only for breakfast, for in the old days it was kept in a vat of hot water on the back of the stove and wasn’t any good past breakfast time. When we were here before, I tried to get one for lunch. Sorry, was all they said. I just can’t face this for breakfast.

We had goulash soup that first day for lunch. A small cup of goulash soup for we were flagging and needed a little something, but were still full from breakfast. This had small diced vegetables in a full-flavored tomato base broth.

Toefelstrudel, or something. It has raisins and apples imbedded in a soft cheese, all wrapped in strudel. It’s how I gained 5 pounds on my honeymoon, some fifteen years ago. We shared this. 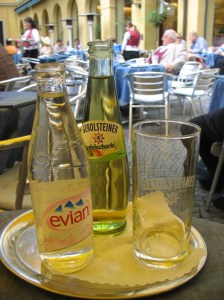 And now to my advice for those of you who want to invest wisely in today’s stocks and bond markets: buy Munich drinks. No kidding. The bottle on the left costs about $4 and the apple juice (fizzy) on the right cost about the same. We haven’t figured out how to get tap water yet (the cranky waiter from the first night told us he wasn’t allowed to sell it–yeah, I know. Just give it to us free. . . ) but we’re trying to figure out a way around the fact that our drinks costs as much as our meal.

Okay, so our meal cost more on this night, but it was the same story: $5 drinks. And these aren’t even the famous brew that Munich is known for. Apparently there is some concern here in this town that the underage are drinking too much. They believe that one reason is that the soft drinks, or water, costs more than the ales and beers, so it’s cheaper to buy an alcoholic drink. We noticed. Non-drinkers are at a definate disadvantage here.

The first thing the waiters will do is ask you what you’d like to drink. I think Germans come in knowing their favorite ale and blurt it out. We are dumb tourists who ask to see their menu and then figure out the cheapest thing and go for that.

Last night I told Dave to just consider it our “tip,” that is to say, that we Americans are used to tacking on 15 to 20% on each bill, which they don’t do here (usually you round up to the nearest Euro, and in nice restaurants, add 3-4% or a bit more). Our drinks are the equivalent of that 15%. We’re trying to wrap our heads around this. Really.

Dave liked the little piggies with the coin in their mouth in the upper left. On the upper right, are the boars, with coins in their mouths. We try to figure out their customs by pure conjecture. Are these good luck treats for Oktoberfest? For year-round? For fun?

We also saw large cones everywhere. Think ice cream cone, but made of cardboard wrapped with colorful paper and LARGE, like 18″ tall. I finally asked, and was told they were for the schoolchildren and were filled with candies and small toys for the first day of school. School begins here September 14th, so they are for sale everywhere.

Dinner that first night was at a local Bavarian specialty restaurant: HofbrauKeller, in Wienerplatz, about a ten minute walk down the street from us. We’d been here before in 2004 and I’d written down what I had because I liked it: Bratenpfandl, which is a leg of pork, a piece of suckling pig and some duck, served with red cabbage (had a touch of spice), a potato dumpling and a semiknudel (or bread dumpling). It looks like a lot, but by the time you carve out the bones and the skin, it’s a more normal portion.

HofbrauKeller is also one of the top ten Beer Gardens of Munich, with a huge area for table under a canopy of spreading chestnuts. We didn’t see it (I’m quoting from the guidebook) but apparently they also have a children’s playground. I guess it’s so the children can guide the parents home afterwards, but Dave tells me his friend Dietmar could quaff five of those very tall glasses of beer and still function.

Dave had Beef Rouladen “Housewife Style” (they’d given us an English menu). It was beef filled with bacon and pickled cucumber, served with red wine sauce, butter vegetables and mashed potatoes. The pickled cucumber? A pickle. 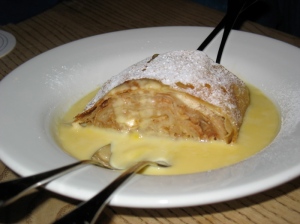 How We Still Stay Married and Happy After 20 Years.

On our honeymoon, we were in a Bavarian eatery and had each ordered their version of the prix fixe meal: salad, entree and dessert. True to habit, Dave finished first (he was the last in a line-up of six children so learned to eat quickly). Being a new bride, I offered to give him a bite of my dessert.

He left me a bite.

So after that we get out a fork and split it. Right down the middle.

Tuesday’s lunch was at the Rathaus in Marienplatz. Dave was at his conference, and I was out schlepping the town, so I decided to be bold: have weissewurst and pretzel. This was the pretzel basket. In America, you can eat whatever’s in the basket and it’s the same price. Many places here dock you by the piece (another discovery on our honeymoon when we tried a little bit of every bread in the basket and were charged for “5 gebaken” or something. Surprise!), so I was careful to only eat one.

The waiter told me it would take 25 minutes for the weissewurst to be ready. I was happy about that because then I could sit and do my journal and write my postcard and not be bothered. When it finally arrived, it looked like this: 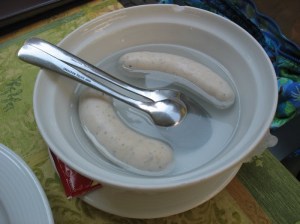 He had to show me how that yes, this was what I had ordered, by gesturing: pick up the spoons Dear Tourist, plop that link over onto your plate and with the bretzel (that’s what they call it), enjoy. It wasn’t until later that I’d read the bit about them being served in the hot water.

Okay, some amount of trepidation here. What if this is completely gross? What if I hate it? I squeezed out the sweet mustard on the plate, cut off a piece of the wurst and cut it into a smaller piece, and then again (it was now the size of a chocolate chip) and dipped it heavily into the mustard. I tried not to make a face as I put it into my mouth.

Surprise! It was very good. It had flecks of herbs throughout so it was a very mild flavor. The texture was even more velvety than the breakfast sausage served at our hotel–this was almost like a firm puree and very appealing. The next bites I took were more normal, and coupled with the pretzel, a fine lunch. I still can’t wrap my head around eating them for breakfast, though.

The view, looking up, from my table. 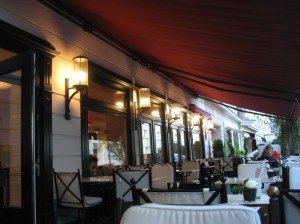 Dave had heard about the restaurant Kafer from a foodie friend of his, and that it was VERRRY pricey, but amazing food. The view above is not that restaurant, but instead is the bistro downstairs, at a fraction of the cost. They close precisely at 8 p.m. (this IS Germany, after all) so as not to interfere with the dinner business of the restaurant. Dave got home from his conference, did some emails at we arrived here (after a short walk from our hotel) at 7 p.m. It took a while for them to translate the menu for us (very nice people) but we were all seated and ordered by 7:10 p.m.

Kafer’s main business downstairs is an upscale grocery store: think specialty foods. Like roses crusted with sugar crystals for decoration. Like candy-coated dark chocolate dragees that are the size of your thumbnail in 15 different colors, including “stone.” Like a full menu of prepared foods, and a fruit stand and a vegetable area, fish, wine, “flesh” and bread areas, not to mention the gift shop and linens area one half-level up. A foodie’s heaven, a smaller twin to the famous Dallmayr shop near Marienplatz. (I went there too, more on that later.) 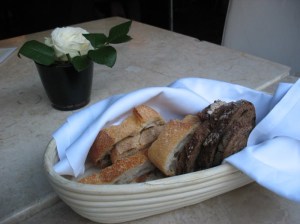 Bread, not charged by the piece.

The butter was placed on our plate by the server, a small round tube wrapped in foil.

I had duck liver ravioli, served with morel mushrooms. An earthy, but delicious, taste.

Dave’s was a vegetable strudel with a white creamy sauce, atop a bed of steamed vegetables: turnip sticks, white asparagus, broccoli and cauliflower. Light and refreshing (we shared bites of both entrees). 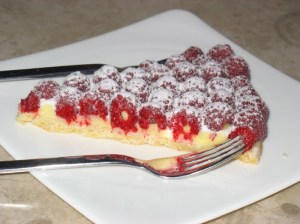 Dessert was a raspberry tart. Instead of a pastry crust, which I find sometime to be tough, this had a shortbread crust with a light filling, and raspberries that they’d just picked from their vines out back. . . or so it tasted. We split this, too.

And how does a tourist get through a long day of hiking around?
Chocolate! In all different flavors!

2 thoughts on “Menu from Munich”