Monday we begin a wild-goose chase for some wood carvings. All I’ll say about that is we had a nice bus ride in the middle of the day which brought us to the Deutsches Museum, Munich’s equivalent of the Exploratorium and Smithsonian’s Science and Industry Museums mashed together. The guidebook says it’s the largest museum of its kind in the world. It IS big.

The front door.
(Take a look at that room with the tall windows on the second floor. We came back to that on Thursday for our final reception of the conference.) 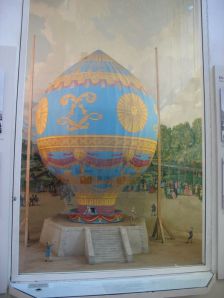 The main hall is filled with an exhibit about flying, beginning with this model of a hot air balloon.

There was an exhibit on how to fly a plane, so Dave and I took our turns at this jetliner. It’s way tougher than it seems.

Next stop, Endoplasmic Reticulum.
Really this swirling aqua mass was inside the Pharmaceuticals Exhibit which shows a human cell model which is magnified 350, 000 times. That purple eyeball is really the nucleus. Dave explained it all to me, as the Biology class I had was also erased from my memory banks some time ago.

And I’m standing near the Golgi Bodies. I wanted to photograph the mitochondria and hang the resultant photograph in my study because they’re the energy powerhouses of the cell and I’m in desperate need of more.

Bayer Aspirin began here in Germany, and the museum has an old pharmacy taken from an early monastery. Click here to go the museum website for a panoramic view. Incidentally, the Chicago Museum of Science and Industry was modeled on the Deutsches Museum.

Drawers in the old pharmacy.

Since it was now getting later and later in the afternoon (the clock shows 3:10), I’m thinking LUNCH, but where to find it? We decide to head back up to our neighborhood.

Later on we found out that the yellow building is an Art Nouveau bathing temple. To get in the mood, the dude on the rocks in the middle of the river is sunbathing in his birthday suit. Dave didn’t believe me at first (I’d read about this Munich experience somewhere), but as we walked up the street to the right of this scene, it was confirmed. There were a few others that you can’t see, behind the bushes.

Where we ate last night, at the HofbrauKeller. About that point, I was pretty much ready to eat the stoplights, the trees, anything. So Dave wisely found usa small place to grab a bit to eat.

We had green salads, drinks and a pretzel. A Bavarian pretzel.

The view across the street (Wienerplatz). We walk home, noticing this small church (below) in this area of Munich named Haidhausen.

We walk past the Klinikum, a hospital, where Dave’s conference is held. At least I think this building is part of that enterprise.
Then, home to our hotel.
.

Later that night we went over to the Opening Reception, tucked in the back of the Klinikum. It’s a bit odd to walk past people in wheelchairs and with casts and bandages on your way to a nice party.  Most people were there already and had found their tall glasses of Munich beer. They served us little open face sandwiches of all varieties, fruit salad, turkey and pineapple skewers and any number of warm drinks (they don’t really believe in ice here and instead chill the drinks first–which sometimes works). We decided against the water-with-gas and went for the apple juice. It’s less sweet here in Germany.  We’d decided earlier that if the refreshments were half-decent, we’d count that for dinner and just come home afterwards. That’s what we did.