The Residenz was the Royal Family’s residence, the place where they hung out for hundreds of years until the Allies (that was us–sad faces, please) bombed it to smithereens in a few hours one day, in order to Do What We Had To Do. The German pamphlets are very nice about this fact, and never mention the complete loss of this amazing palace. Truthfully, the stats are that 23,000 square meters of roof was reduced to 50. Much of the artwork and many of the treasures had been moved to a safe location

But don’t worry. The Nazis, in all their tidiness, photographed this place ad nauseam, so with the fragments of this palace that were left, the archived artwork and treasures, all those photographs (and I’m sure some war reparations money), they rebuilt the thing. Dave and I both agree it’s one of the most impressive royal houses we’ve seen, perhaps because it’s a highly edited collection.

The Shell Grotto. I’m going to get Dave busy on the weekends building me one of these. 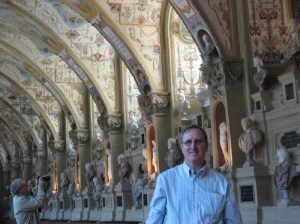 The next room is called the Antiquarium because they keep antiquities in there. This guy is not one of them.

The scale and shape and size of this hall is so harmonious. It’s a pleasure to walk in and be in, and perhaps you can see from the people in the picture, it’s very large, but full of light and interesting things to look at. 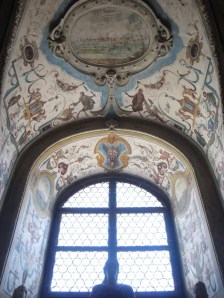 Because this is a blog post, I’m going to give you the edited verion, the highlights according to Elizabeth. One is the ceiling corner of the next room (below). I have three more corners, but won’t post them, because you get the idea from just this one.

I liked the old-fashioned bee hive (looks like a hut of straw) and all the gilt bees attached to this ceiling. Money was no object, if you were a king, and so much of the ornamentation attests to this fact. But when I think that much of this is a reconstruction, I was amazed at the skill of the twentieth-century artisans who were able to put this decoration onto the walls, ceilings, doorways, hallways, everywhere. In the other four corners, they had a ship, and a palm tree, and a dragon on fire, not to mention the scenes in between the corners, with full-scale people lounging around showing the times of the day (didn’t photograph those as I was enamored with the bees). 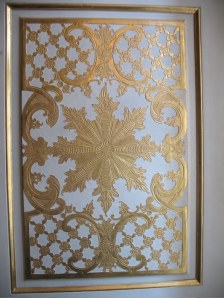 The door to the Four Horses Salon and adjoining Kaisersaal (Emperor’s Hall). Last time we were in Munich, our conference had a reception here in the Residenz with the Deputy Secretary (equivalent to our Secretary of State). The conference organizers put in to the Secretary’s office for a reception and that office chooses the place and provides the food and hor d’ouvres on their budget. We lucked out and were here.

Detail of a door jamb.

Here’s the big hall, with its pieced marble floors, huge paintings and chandeliers. This is the one place you can linger, as it has chairs you can sit in. The reason why the call the adjoining room the Four Horses room is that it used to have a painting of Four White Horses on the ceiling, but no longer. Damaged in the war. This sort of thing happened over and over–referring to what was there, but is no longer. I can think of many instances of this in my own life, where the perception and memory are stronger than what exists now. And then there are the other times, where I’m madly scrambling just to keep up with “what is.” Sometimes it’s tiring to relearn.

This room is tiny, a small chapel just for the King not too far from the larger family chapel. It has a silver-encrusted altar, and piedra dura scenes around on the wall. Using Albrecht Durer as a model, craftsmen from Italy pieces together depictions of Mary’s life in stone–kind of like paint by number but with rocks and glue. So there’s silver and black on the altar, stone all over the walls, and the ceilings are painted a brilliant blue with gilt decorations. Amazingly, it all works together.

Looking up into the cupola. We were prevented from entering by a velvet rope, so the angle is skewed (the stone floors are original and they’re trying to protect them).

Stone on the left, a glimpse of ceiling, then the altar. 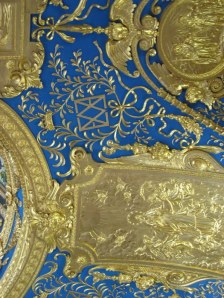 I like photographing mailboxes when I travel, and this little slot above the putti’s head and wings, tied with ribbons, reminds me of a mailbox slot. If you could post a letter to Heaven, what would you say? (Putti is the high-tech generic name for Cupid.)

Coming out of the chapel, is this Stag Hallway. Even the plain spare walls become beautiful with the shiny marble floors and the sun shining in. 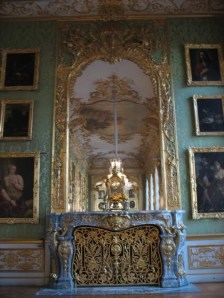 This is the Green room section, repete with mirrors. Apparently having a plate glass mirror was a real sign of wealth in the 17 and 1800s and this room (and some of the next) showed that off. This fireplace is at the end of a cross-shaped arrangement of rooms, and while the photograph doesn’t really show this, it reflects back two galleries just like it.

At the other part of the “cross” what’s reflected back, five galleries away, is this exquisite little mirrored room, with gilt framing holding little jars of blue and white porcelein. While Dave likes the Four White Horses area, I’m crazy for this room and the Red Cabinet (next).

Many rooms are kept curtained and dimmed (like the Stone Rooms, which didn’t photograph well), but as soon as we arrived here, the sun came out again from behind a cloud and lit up the place. If I were a King, or his Queen, I’d spend most of my day here. This was right off of the Royal Bedroom. 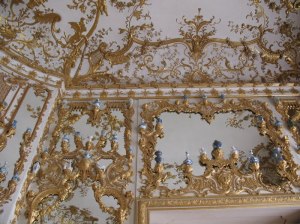 This is the Red Cabinet, a tiny room with miniature scenes covering the walls. The website states that “With the exception of the two sets of doors and the miniatures, the Miniaturenkabinett was completely destroyed in the Second World War. It took many years of painstaking work to reconstruct the stucco, the carving and the red japanning.”  It’s stunning.

The chandelier is made from ivory. 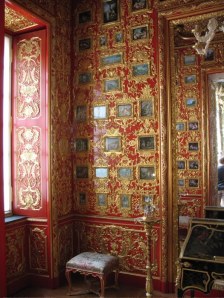 The last hall of the Residenz is the Family Portait Hall (my name for it). Stacked three high in gilded frames are portraits of the Wittelsbach family.

We were happy to have the chance to come here again, and went out into the day, heading over to the Yellow Church (look later for a post).

One thought on “The Residenz”