New bed and breakfast, new placement of light switches, new kinds of towels (amazing how this differs) but same breakfast: scrambled eggs.  This one was delicious and upscale (served on a TOASTED croissant with a light lemony hollandaise sauce) but after having eggs five days in a row, we’re kind of done with that.  We headed out to Peggy’s Cove this morning, ready for a new vista, and we got one: cerulean sky and waters, quaint vistas, lots of wind: bracing.

We walked around and nearly every shot I took, I thought about my father, who likes to paint. While I don’t know if he does seaside scenes, I do know that he’d be able to rid our vistas of the ever-present electrical lines threading through our views.

In this view, the electrical lines look like puppet strings to the houses.

So when we were talking to the lady in the Halifax Tourist Office, she said to head out to Peggy’s Cove today, because on Saturday, a huge cruise ship was coming in and Peggy’s Cove would be overrun with tourists.  We obliged, because it is a teensy little place, with one picturesque village and a lighthouse.  It’s oft-photographed, and we very nearly booked the only B & B in town for a stay.  I’m glad we didn’t, because what I’m showing you in photos is really all there is to this place, if you don’t include the GIGANTOR gift shop, which I don’t, although I mailed a few postcards from there.  Hope the family got them.

We walked around the corner and saw these two sights: the lighthouse and a bagpiper.

Yes, she really is playing for college–her son’s.  She’s a single mother of six children and her son has the chance to study abroad and she wants to be able to help him to go.  Having been at the money-for-college stage, I donated.

At my request, she played Scotland the Brave for me.

A different view, from below. There are more pictures at the Lighthouse Post on this site.

Did I mention it was windy? 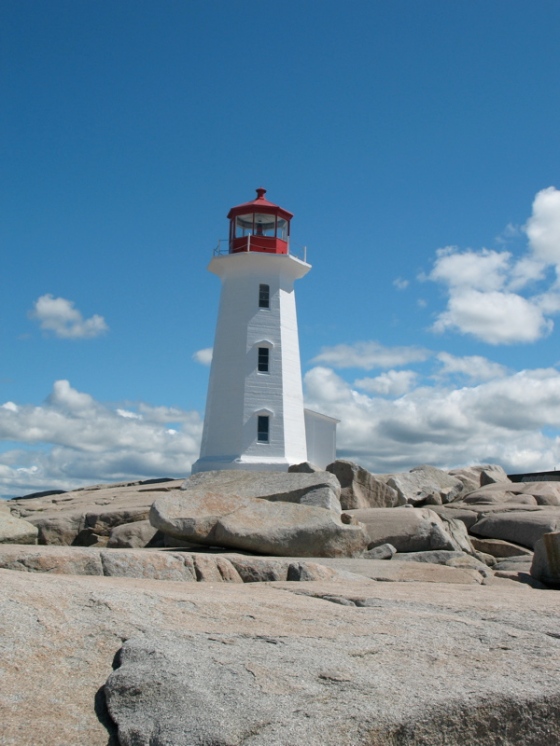 The lighthouse itself sits out on a confusion of boulders, and I remembered Peter’s wedding, when we all visited Pacific Grove and went down to the shoreline to climb on rocks and visit tide pools.  I could imagine them all here, doing the same thing, in spite of this sign:

I don’t think “savoring the sea from a distance” would suit either Andrew or Emilee. 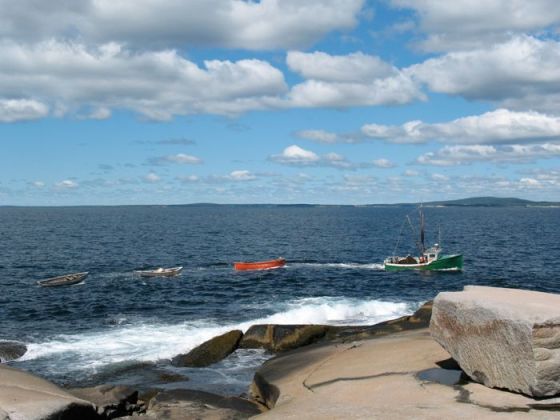 Peggy’s Cove village is off to the right, anchored by the rusty steeple of the church.

By now, we’re pretty much done, and more tourists are arriving.  I found out the guy who owns the B&B here is selling.  Any takers?

Not only does Halifax have the Explosion of 1917, and is affiliated with the Titanic but this area was also near where the SwissAir flight went down in September of 1998.  This is the memorial to those who died, and it has the words “they have been joined to the sea and sky.”  Small memorials for huge tragedies.

The guidebook says the town Prospect is lovely, so we head there.

The guidebook lied.  We spend exactly 20 seconds there, enough time to photograph this peculiar olive-colored house.

But on the way back we stopped here for lunch, run by two sisters.  Dave was at first skeptical, but check out the sign up top for Lobster Rolls.  I’m in, and after seeing a small van tour bus here, Dave remarked that often they know the best places.  He was in.  We placed our order and she hollered for us when it was ready.

After lunch I talked to the woman manning the window, who was about my age.  I asked her how she came to own this little stand.  She told me that about six years ago, her son bought the stand, and after a month, he asked for some help from “me–his Mum,” she said, patting her chest.  So she helped but then little by little–like when a child gets a new dog and promises to take care of it–she found herself running the show, without the son.  She–Carol–pulled in her sister Marilyn, and bought him out.  It’s been the two of them ever since. Real food, quite delicious.  I can recommend it.

We’re at that critical junction in any tourist’s trip where it is necessary to find the laundromat.  We did, and other than some fun and games trying to figure out whether or not to use Loonies  (their one-dollar coin) or a series of quarters, we got the wash done.  This was the sight out the window, as it was affiliated with a mobile home park.  One young man came in–an American.  He and his wife decided one day to Leave The Rat Race and go traveling for a year.  They bought a fifth wheel, and were touring. We talked about whether or not he should head up to Newfoundland.  Because of his age it seemed to be an imperative that they do so.  Because of our age, we figured you’ll see what you see and let the rest go.  The toll to get over on the Newfoundland Ferry was in the neighborhood of $1200.  I wondered how they got their money.  He offered to share his soap with us, if we needed any. 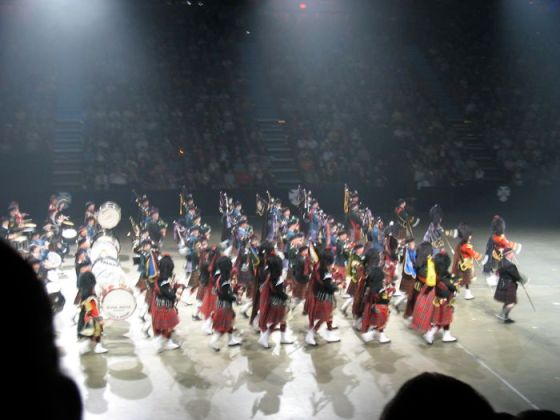 That night we went to the Halifax Tattoo, a large military/gymnastics/dance show.  We were kind of surprised by all the different acts, but we liked the bicyclists from Belgium quite well, were bored by some of the dances and absolutely embarrassed by the United States entry.  Our marching band was worse than a high school halftime show, in my estimation.  Much worse.  They had come onstage shortly after a group from Britain, who gave precision a new meaning.  The US band looked like they’d gone out onto the street corner and recruited from downtown DC, and we were all shapes, all sizes (if you get my drift) and certainly varying abilities.  Pretty pathetic.

The pipers were the star of the show.  You only get this blurry photo because we weren’t supposed to take photos, so I compromised and did it without a flash.

I could take a picture of these two Royal Canadian Mounted Police when I went out at halftime to get a T-shirt.

I took one with her–as an example to my granddaughters.  Who, of course, can never be one of these because they are not Canadian.

The Tattoo’s enjoyment was a bit compromised by the fact that Jack Sprat’s wife sat next to me and not only occupied her chair, but some of mine as well.  Add to that the fact that they’d brought their infant, who promptly started crying when all the cannons sounded at the start of the show and cried off and on for the rest of the evening.  (I could only think that they should have gotten a babysitter to spare the poor child’s ears.)  And add to that the smelly bag of popcorn that they brought back from halftime, and as Dave noted, they seemed to be like Jack in the Boxes, popping up and down to get in and out, and add to that her giant backpack  (on the occasion of when she’d handed the infant to her husband or to the grandma who was a bit down the row) that sat on her lap like it was a large dog, obscuring the view around her.

But the pipers were wonderful!