The little black car to the right was our main mode of transit around Canada, and we logged some 1202 miles driving around Nova Scotia, Cape Breton Island and Prince Edward Island (thats 1934.4 kilometers, which sounds like a whole lot more than the miles equivalent).  Here it’s parked on the car/people ferry from Prince Edward Island to Nova Scotia, heading across the Northumberland Strait.

Like good little passengers, we hung around for a few minutes, but then went upstairs to the Feeding Frenzy Lounge, where it smelled like scrambled eggs and bacon.  I guess all the Asian tourists were hungry; there wasn’t a seat available inside.  So we headed outside into the wind and cold.

Because it was a rainy day, and the usual scenery was obscured by fog and damp, I tried to see the ferry in terms of shape and color, instead of looking for the usual tourist views.  What follows is a few of our shots on that gray day. 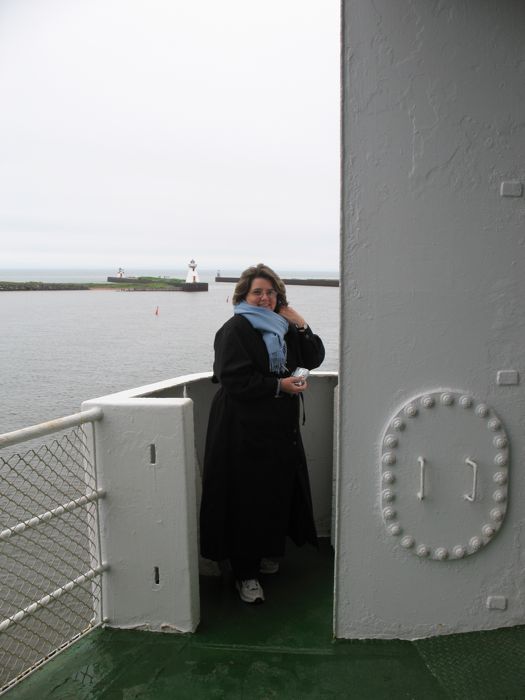 I wore this coat three times.  Here’s one.  The other two were schlepping around Green Gables, and watching fireworks in Halifax on Canada Day. 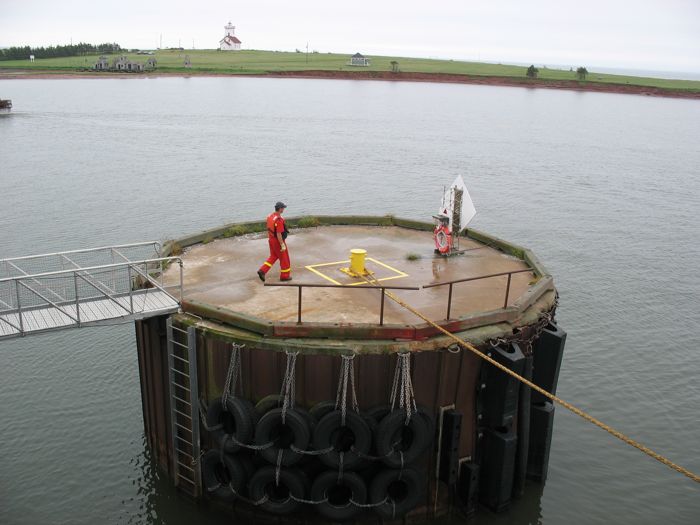 The name of our ferry was the Charlottetown, even though it sailed from Wood Islands.  The rope mooring the ship to the dock is about to be cast off, which made me wonder how in heavens name did they get the rope out to that peg in the first place?  You could lose sleep over these little questions of life. 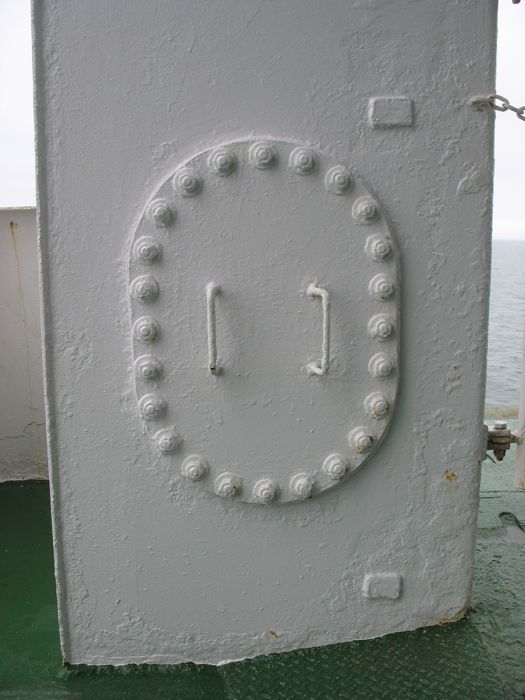 The bolts have an almost sculptural quality to them, smothered as they are in white paint. 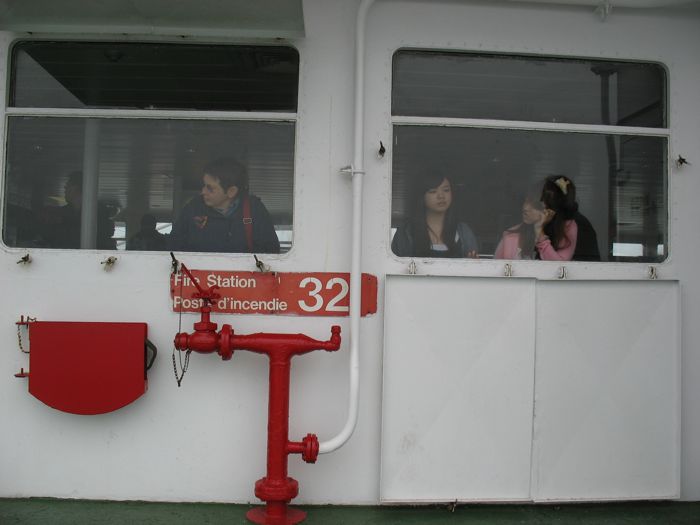 Any color pops out on this white ship.

And this blue padlock.

We went up on observation deck, where the wind was whipping around at a good clip. 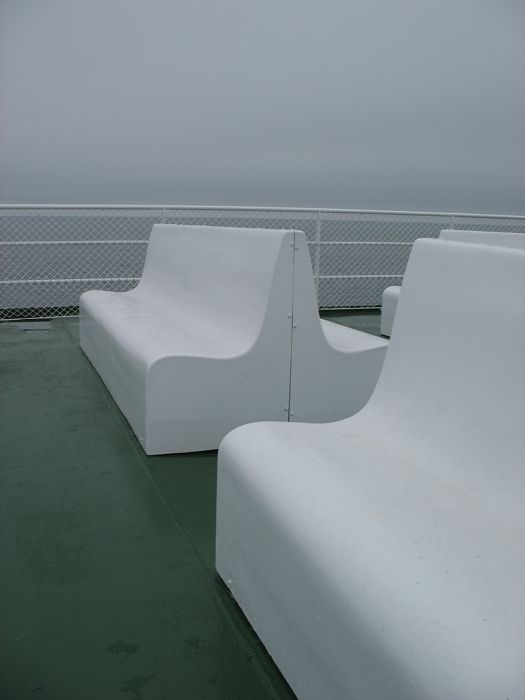 The girl in pink backed into the shot, and I liked that spark of color.

As you can see, we had the place mostly to ourselves.

But the wind became too cold, so we went back down to the Lounge, and then snuck down to the car deck, where we climbed in and let the boat rock us to sleep.

We awoke when we heard the voice over the loudspeaker tell us to return to our cars.
Check.
Land is sighted: Pictou Harbor on Nova Scotia. 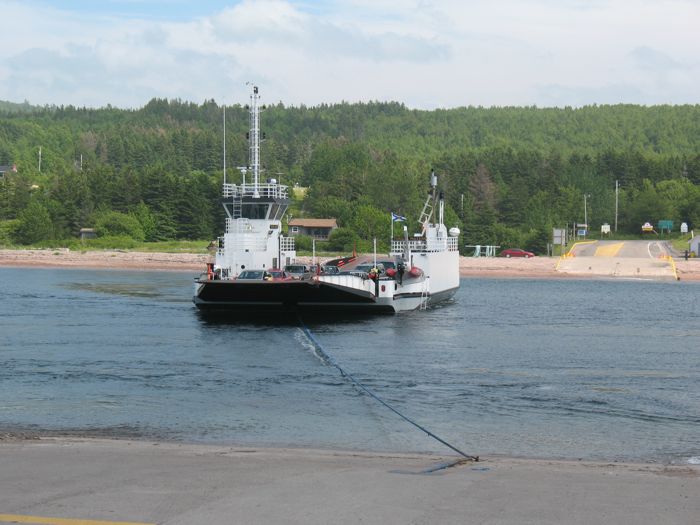 Another day we took the rope-drawn ferry across St. Anne’s Bay.  There was about a 5 minute wait, then the ferry showed up, off-loaded, loaded and we had about a five minute ride across. 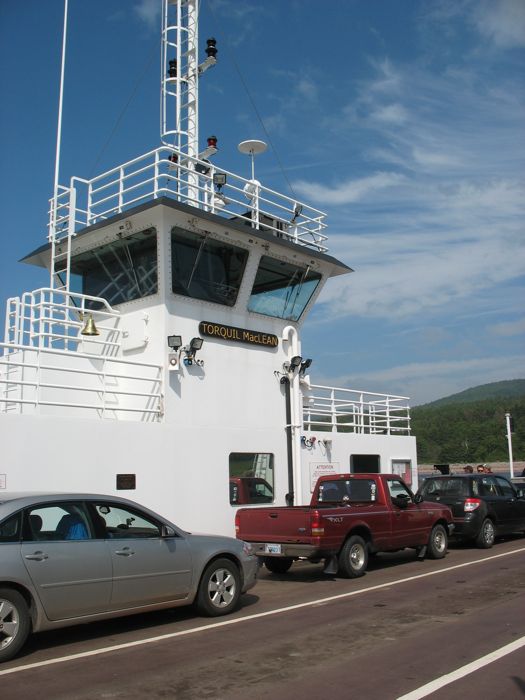 The Torquil MacLean is the name.  I thought it was tradition to think of all boats as feminine, but I’d sure like to meet a lady with the first name of Torquil.  According to the locals, this is known as the Englishtown Ferry, because it lands in Englishtown (where we were headed to).  The website explains the name and few other tidbits:

﻿The Torquil MacLean holds 15 passenger cars but can handle larger vehicles (including semi-trailer) as well. It operates 24 hours a day and is the busiest of the 7 inland ferries operated by the province of Nova Scotia, handling an average of 600 vehicles a day.  The Torquil MacLean is named after the man who ran the first ferry (a row boat) at this location in about 1871.

Of course the other types of transport were jet airplanes, but that’s nothing unusual in this day and age, and you can imagine them yourself, although none probably have the name like Torquil MacLean.