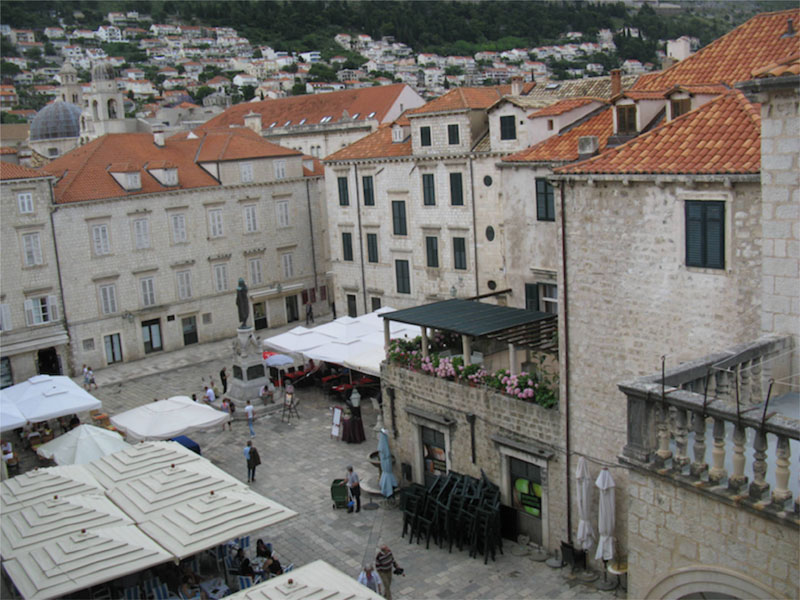 (This is the third post of our Croatia-Budapest Trip, June-July 2014.)
Wednesday, June 18 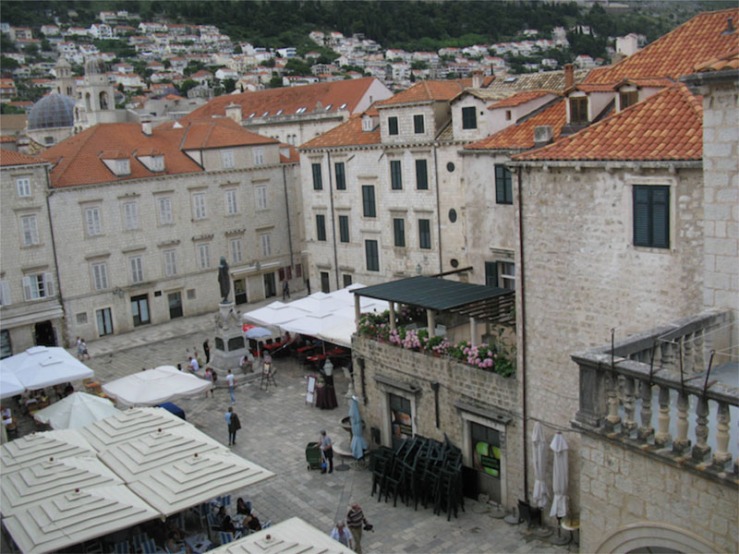 This is the view from our third-story window, towards the left, overlooking Gundelic Square. 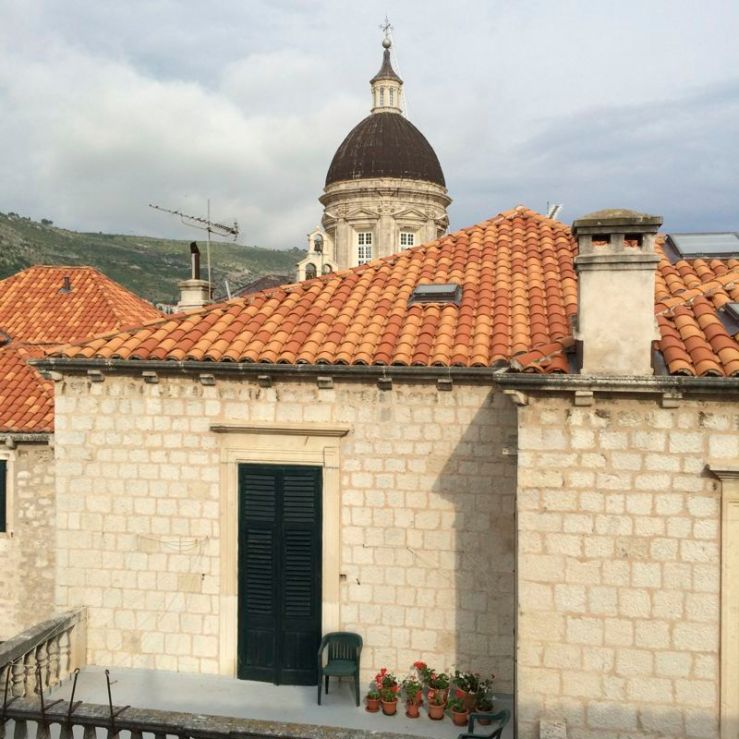 This is looking straight ahead (taken on the first night we arrived).

And this is looking right, towards the steps heading up towards The Church of St. Ignatius. 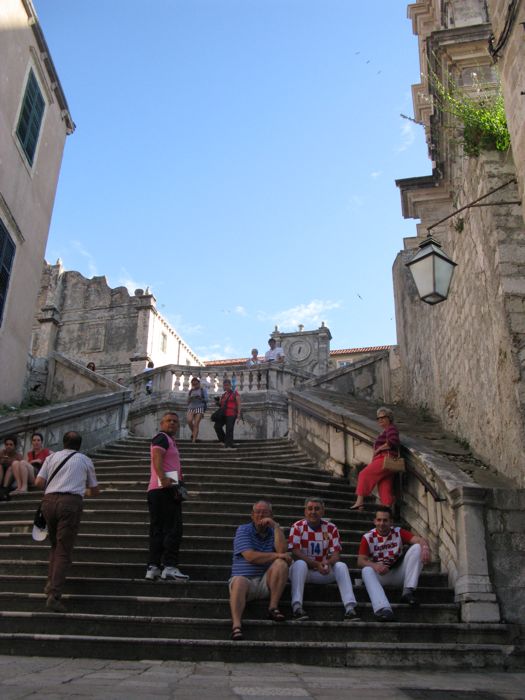 Usually when heading out of our sobe, we turn to the left toward the main street, the Placa area, but this late afternoon we turned right and headed up the steps on the other side of the slanting bowl that is Dubrovnik.  I notice the men in their Croatian T-shirts: spirits are high here tonight for the Croatia vs. Cameroon game at midnight. 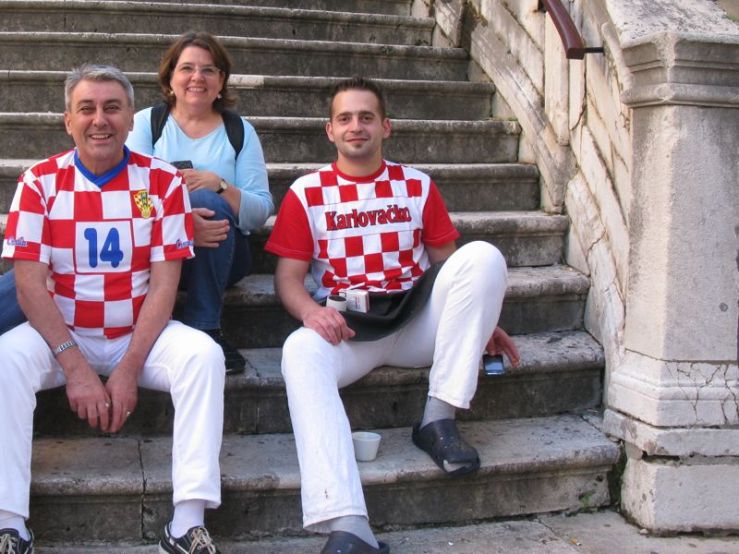 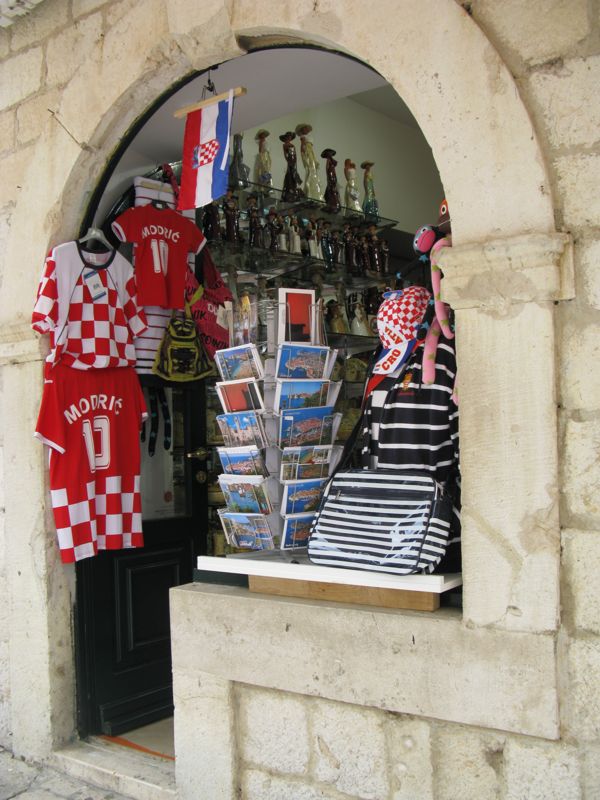 Most all the souvenir shops carry some form of the checkered shirt (one of my souvenirs from Croatia, purchased later on that night), and many of the waiters are wearing them.  One young man told us that the owner of the place brought them to work to get the waitstaff to put them on.

Notice the big screen TV.  They were everywhere. 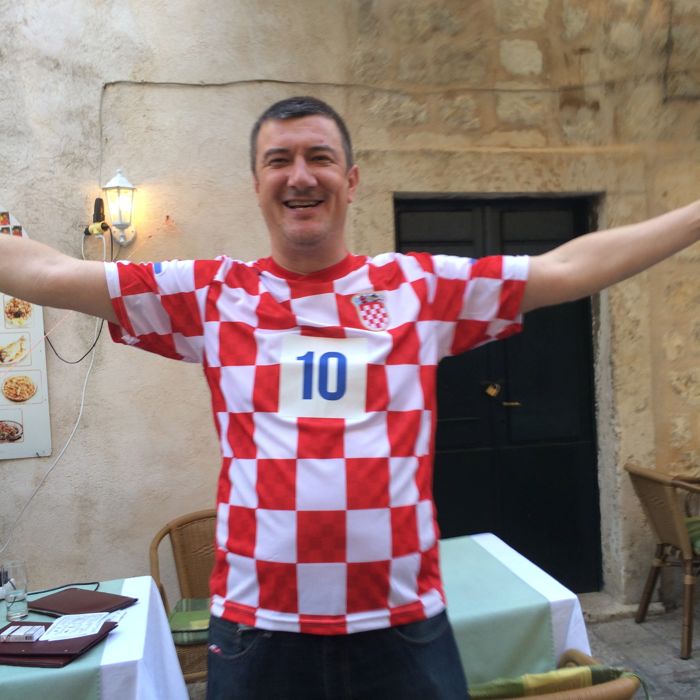 Usually outside of each restaurant there is the person who talks to the tourists, chatting up the menu and getting them to sit down at a table.  We saw this man every day because their place was just outside our sobe, but tonight he has other things on his mind, especially when I asked him who was going to win tonight. “We are!” he said, arms out wide.

St. Ignatius is at the top of the steps on a small plaza, church at one end and three restaurants at the other, bordered by those steps and another old building (shown above-above), which I found out later was the Jesuit college, where, according to Frommer’s “1658 Jesuit College (Collegium Ragusinum), the school where many of Ragusa’s greatest scholars were educated.” Ah, got it.  And apparently those steps we walked up were supposed to mimic Rome’s Spanish Steps, but that was lost on me, as the scale is so dramatically different.  But in hindsight, I suppose they do resemble Rome’s staircase.

Just inside the door, on the right, is the grotto dedicated to miracles and Mary.  It was not the last time we would see a grotto in a church, as they appear to be a popular motif.

Lots of crutches (some vintage) were lined up, as well as with other mementos of miraculous intervention by the Virgin.

And beside her, as long as you donate some kuna you can light a candle for your prayers and hopes.  I could think of a few to add.  St. Ignatius is like so many churches we saw in our travels.  Without light (either artificial or natural) the paintings around the church appear slightly gloomy, certainly well-done but by a lesser artist than the Big Ones, the decorative gilt rather muddy in the dim light, in short, another dark Italianate church with pictures of ascension, deliverance, and redemption that we couldn’t quite engage with.  On the web I’ve seen photos of this church lit up at night and it presents a much different feeling, like the next night when saw main Dubrovnik cathedral all lit up, the brilliants lights calling our eyes to the decorative surfaces which now, in this church, were obscure. 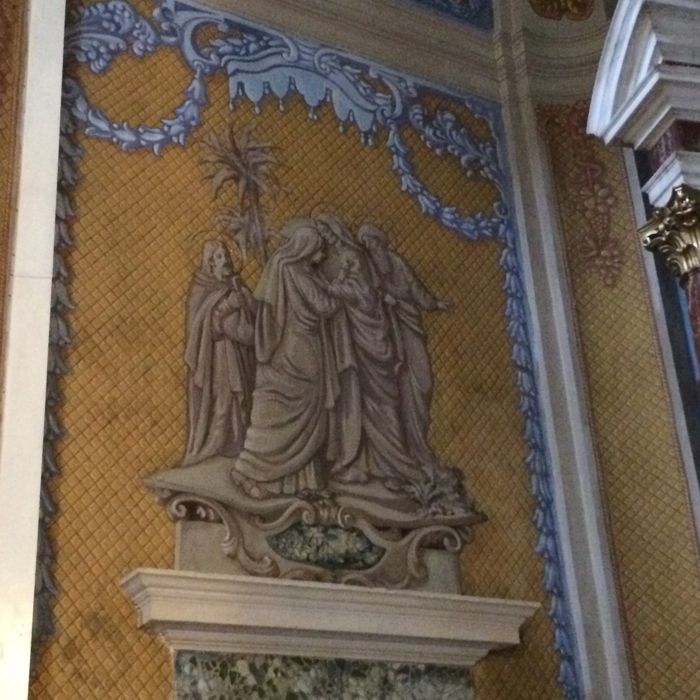 I caught only this grisaille rendition of a gathering of saints, outlined in a blue and white garland, near where the door opened.

We walked alongside the old wall bordering the sea, looking for that famous Hole in the Wall Bar that had a terrace that opened out onto sea views.  We found it, but kept going.  (It was pretty packed but we weren’t yet ready to sit.) 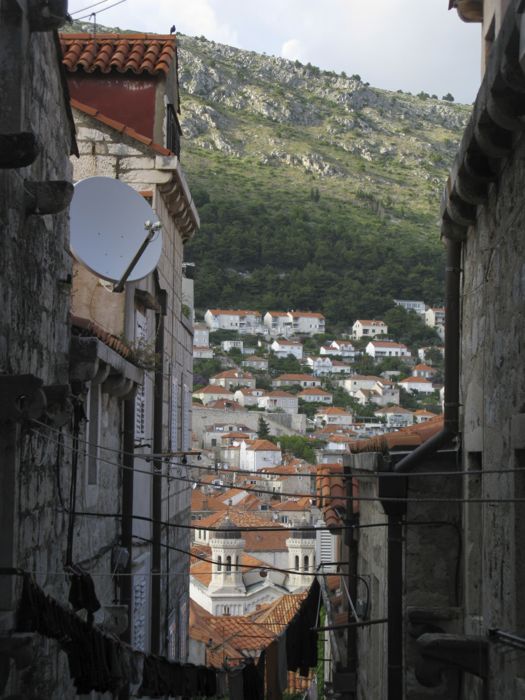 Looking from the sea side of Dubrovnik, down and across and up to the mountain side.  The twin-steepled church there in the middle is the Serbian Church.

Sights along the walk. 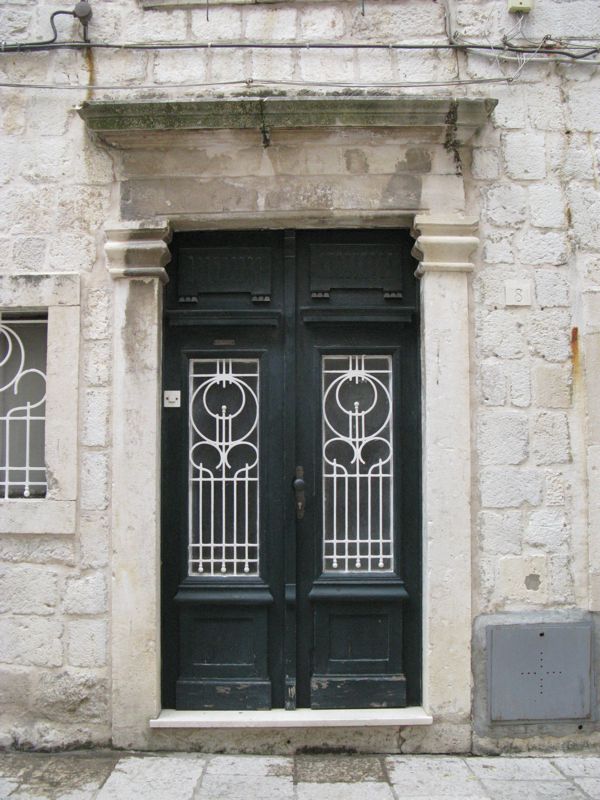 Newer electrical wires snake along the outside of old stone houses by the hundreds of miles of cable, it seems like. 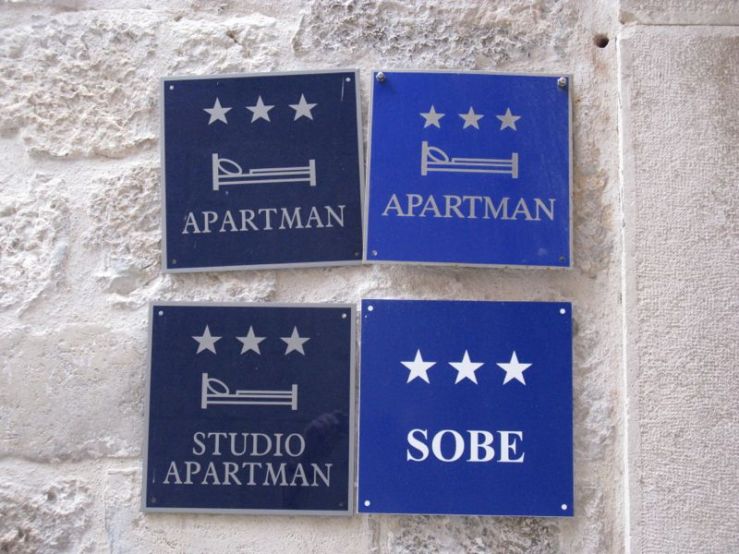 This is a detail from the Serbian church, as we walked down from the wall back towards the Placa (main street) in the center of Dubrovnik.

Details from St. Onofrio’s large fountain near the Pile Gate.

Bubble maker in front of the fountain.  His was an unusual way to make money.  We saw many singers strumming guitars with their tip jar just in front of them, or young men and women (why are they always young?) accosting tourists as they passed by, drumming up business for an island cruise, to enter a restaurant, or to purchase bus tickets for a trip to somewhere.

A small altar high on the wall just inside the Pile Gate.  Icon for icon, I still think the altars on the Italian island of Burano are the best.  Out the gate we wandered, looking for a place to have dinner. 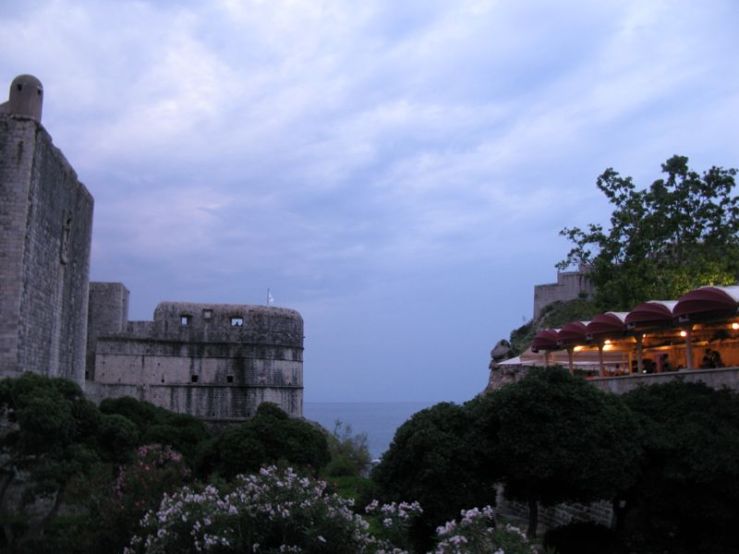 We stopped to look at the restaurant on the right, Dubravka.  It’s the best candidate of the evening.

We shared the grilled vegetables, and Dave had the mushroom pasta with ham and I the shrimp risotto.  Of course we both shared the chocolate cake.  The view was wonderful and we enjoyed our meal as we watched the colors shift during the setting sun. 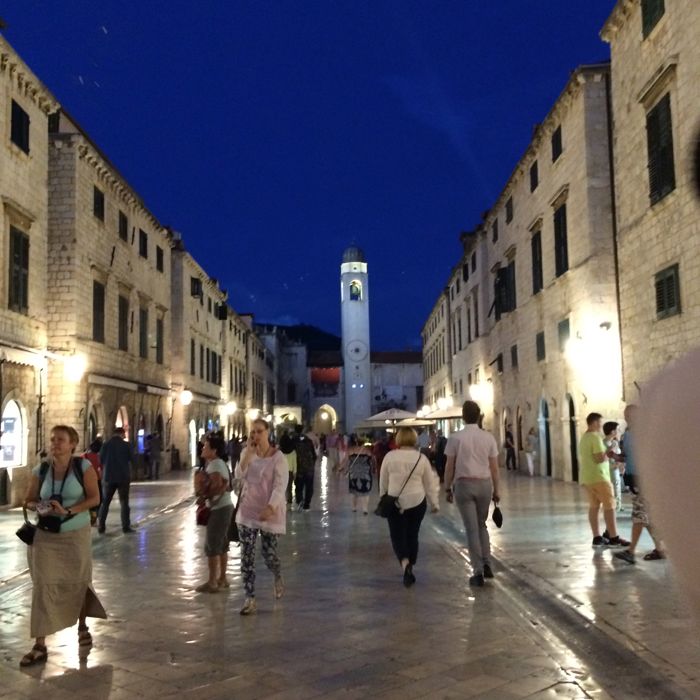 We walked back through the Pile Gate, noticing the night sky once again, as well as a teenager talking on the phone in her window high above the Placa and the futbol game enthusiasts, trying to broadcast Croatia’s checkerboard on walls or floors. 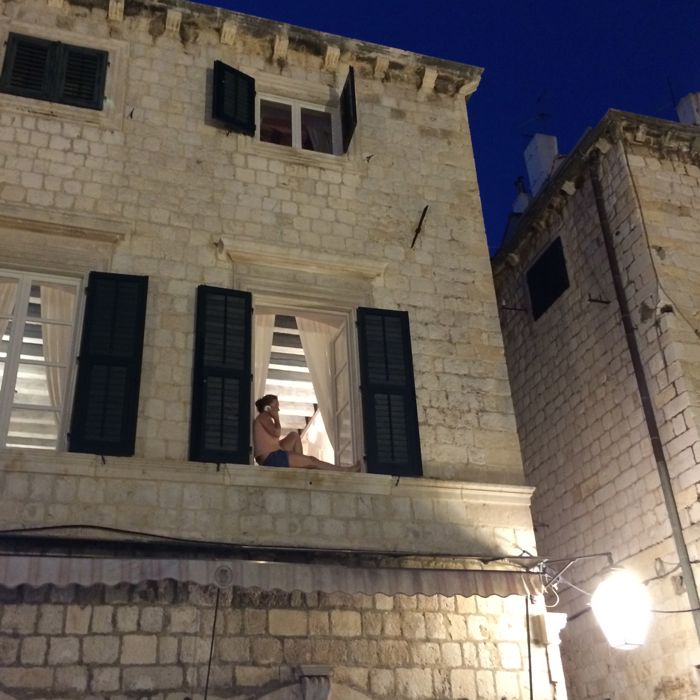 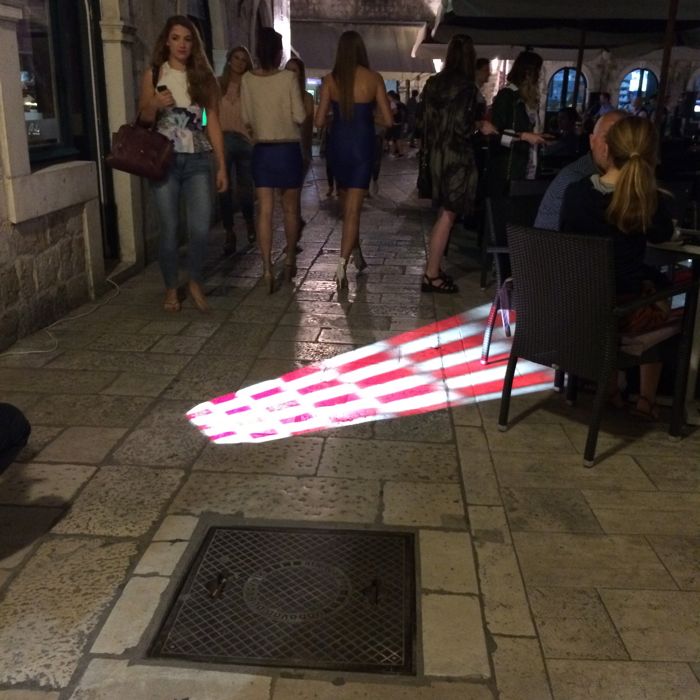 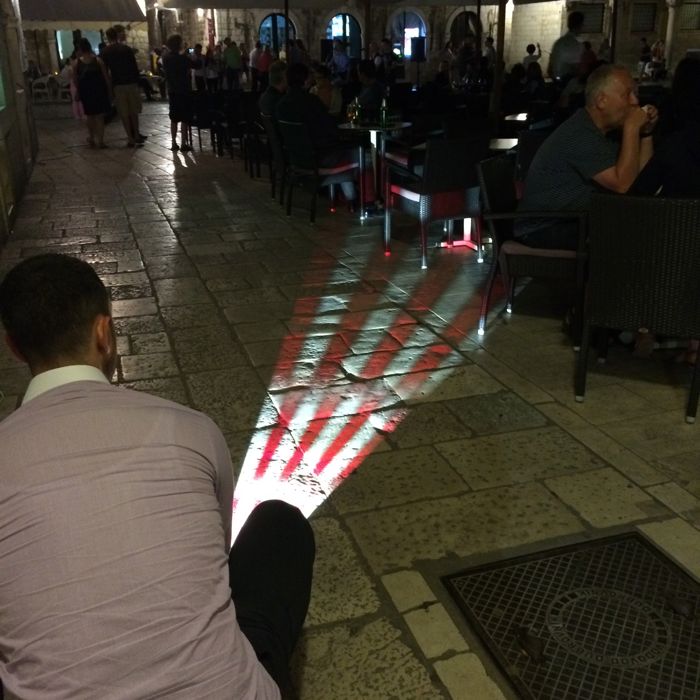 Sign at the pizza place just below our sobe.  Since his place was right next door, he stored his chair cushions, the sign and the plasma TV in our lower downstairs hallway.

After getting ready for bed (still jet-lagged tourists, here) we could hear lots of noise from the square.  I looked out, but the umbrellas obscured the tables with people staring straight ahead at the plasma TV set up for the game.  About 11 p.m. the sound was switched over to the loudspeakers all around the square, and whenever a favorite song would come on, it seemed the volume would go higher, never returning to the original setting.  The sound was funneled up to our windows, echoing and reverberating against the buildings all around us.  By midnight, when the game began, we put in our earplugs, closed the shutters, the windows and turned on the A/C.  I finally drifted off to sleep only to be awakened by a booming clap of thunder sometime in the night.  I groggily opened my eyes to see Dave standing by the open window.  And then I didn’t hear anything else, and we didn’t wake up until 9 a.m. the next morning.  He told me he couldn’t believe how raucous it was down in the square, but at 2:30 a.m. just as he opened the window to see what was going on, a torrent of rain and thunder arrived, clearing out the square.

Next up: Dubrovnik, heading out

1 thought on “Dubrovnik Slows Our Pace”