Yes, this was shown before, but this has different light so the front decorative art can be seen.

Dave returns, and he hasn’t had lunch, so we re-trace our steps to the Galerie Lafayette because, as I told him, there are so many choices!  Even though it was only about 90 minutes after my visit, most all of that abundance of food is gone.  He found something to eat, a dessert to try, and we packed it up and went to the Gendarmenmarkt to eat. 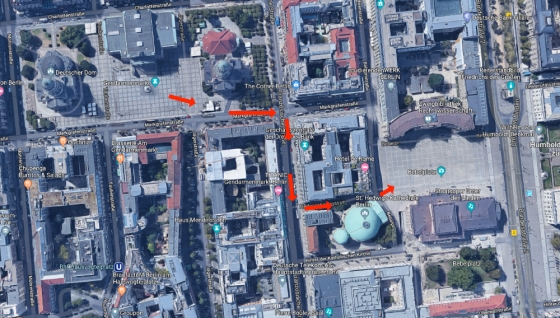 As his tour guide, I thought it important that he see Babelplatz, so we followed the red arrows, coming in alongside St. Hedwig’s to the square. 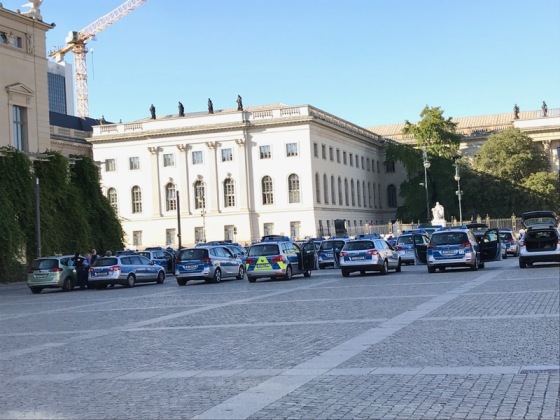 At the edge of the plaza, by the bus stop and along the Unter der Linden boulevard, were a score (or two) of police cars.   We watched them while waiting for the bus.  And waiting.  And some more waiting. 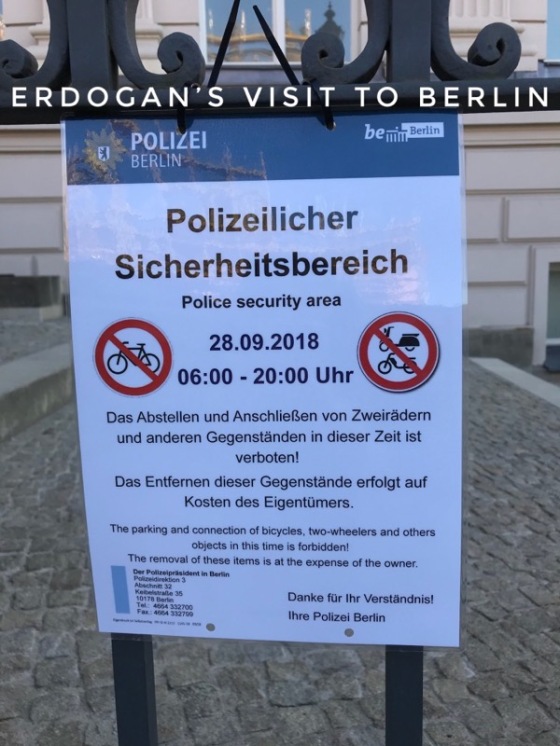 The nice police officer who spoke to us casually mentioned that there would probably be no busses running, because…why?  They couldn’t tell us.

Like the bicyclist making a U-turn here, it was time for Plan B: walk.

So we turned to our right and walked.  Really, the downtown of Berlin isn’t all that huge, so after a few minutes we arrived at Berliner Dom, by all the museums.

We heard all the sirens, and turned to watch Erdogan’s motorcade stream up the street.  Obviously that was what was holding up the busses, and that the police man couldn’t tell us.  It wasn’t as grand or as lengthy as the one that greeted us our first night in Japan (Trump’s motorcade), and after it passed, we kept walking.

We can see the Fernsehturm (the tall TV tower), but first, Dave wanted to see the beautiful old church, so we stop at St. Marienkirke, where I heard the organ concert. 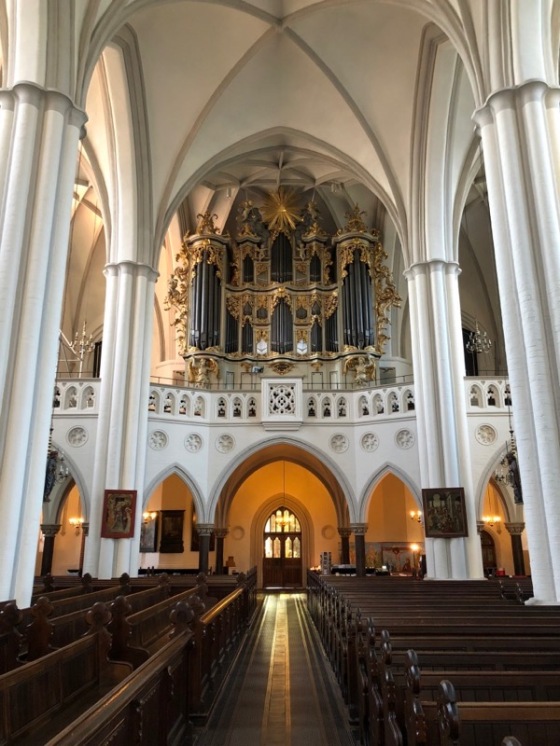 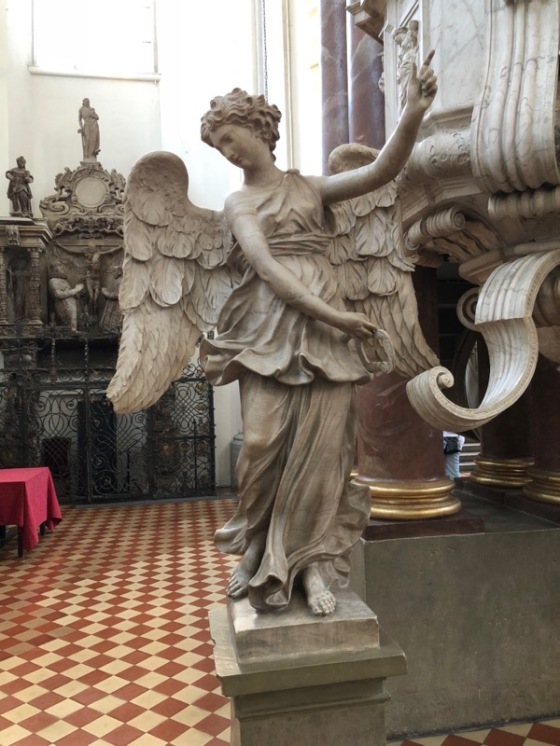 We step outside, hook to our left back around to the large plaza, and spot the Neptunbrunnen fountain, backed by the Rose Rathaus. 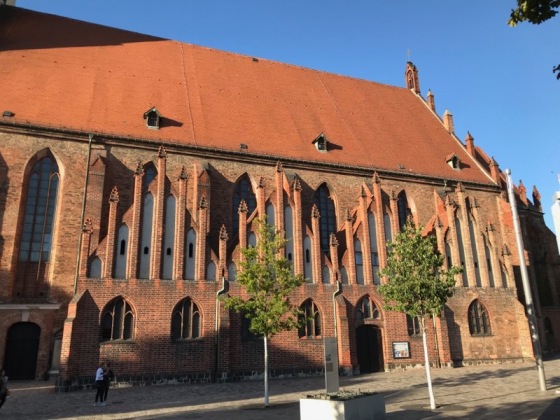 We turn back to see the side of the beautiful church with its details (above and below) then stroll up the plaza.

The Fernsehsturm, with its origami-like wings at the base.

We cross underneath that, and into the large banhof (train station) at Alexanderplatz:

We head out the other side to Alexanderplatz itself. 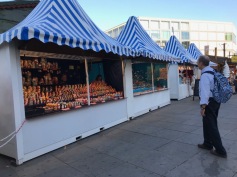 The light is casting long shadows, some parts are already in darkness, pointing to the realization that our last day in Berlin is coming to a close.  Time for dinner, time to head back to the hotel and figure out All the Details. 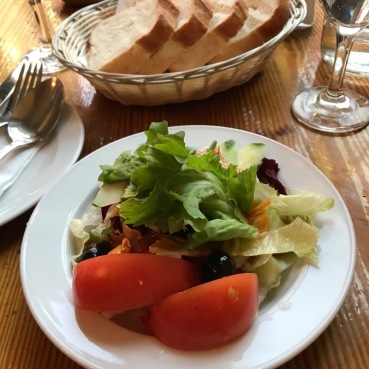 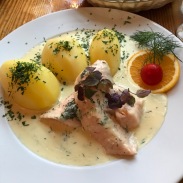 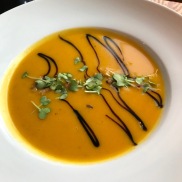 After a Ubahn ride and a long walk, we enjoy a delicious dinner at Cafe Orange.

Golden light of sunset brings out the beautiful hues of Berlin’s buildings.

Even with Google Translate, we couldn’t figure out what this meant.

End of a good trip, we take a dual selfie in the elevator. 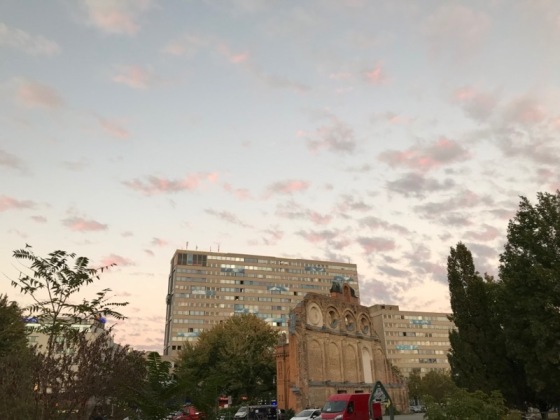 We pack, and head downstairs to try to figure out how to print out our boarding passes, check in to our flights, and wrap up the trip.  We speak with the young woman who has helped me enormously, and she gifts us two jars of jam from the Movenpick brand of foods.  In conversation, she asks us how we liked Berlin.  I could honestly say I loved it.  In one of our exchanges, her guard let down, she shared that she found the East Germans still “a little bit strange,” and I’d have to agree with her on some counts.  I appreciated that we’d been there long enough to enter her world, see a slice of life that she encountered and understand.

Next post: Multiple Levels of Dante’s Hell, or Returning Home.