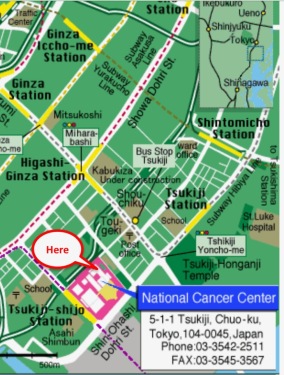 Meanwhile, this was the beginning to Dave’s day: finding his way to the National Cancer Center, south of our hotel, near the Tsukiji Fish Market.

And his day begins… 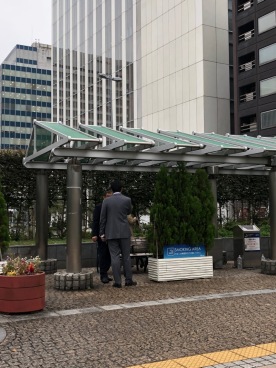 We both find the rules about smoking in public to be interesting.  Here are two smoking areas near his conference (click to enlarge), and signs on the pavement reminding the citizens of Tokyo: 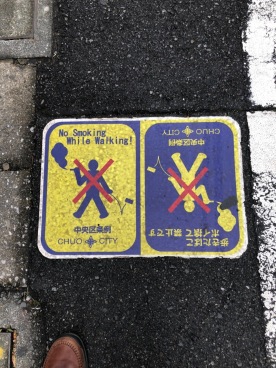 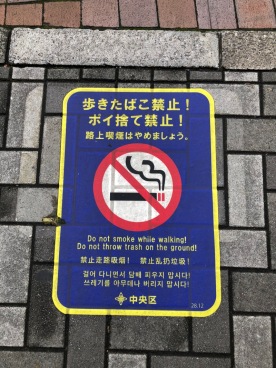 A few members of his group went to the fish market for lunch, passing by the sake barrels (above).  Dave told me that if you are going to go to a fish market for lunch, you’d better go with someone who knows what they are doing; none of his group did, so he pressed on when they stopped, the squid lollypops not really appealing to him.  He never did find anything really great.  We repeated this experience multiple times, eating a lot of mediocre food, not because there wasn’t better food — but because we didn’t know where to find it.

For some orientation: our hotel in Ginza was probably about where the “z” in the word Ginza is, on the map above.  Getting the doll was in the Shibuya area, and I continued walking in that area, carrying my pink and blue doll bag with a large Blythe doll on the side. 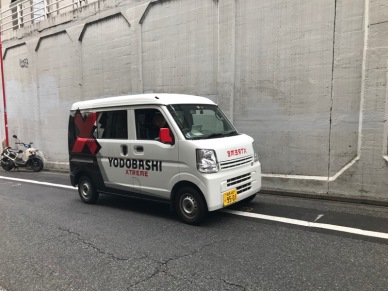 Yodobashi! I thought, as I passed this miniature delivery van.  Add that to the list of things to see.  I walked back towards what I thought was Shibuya, trying to see their famous “scramble” crossing, but went some distance in the wrong direction.  Lost a bit, I figured the crossing must be back by the train station, so backtracked to that place.

I’m trying to head to the sushi place that my brother Andy had told me about; he visits Tokyo frequently, and had mentioned Midori sushi to me. 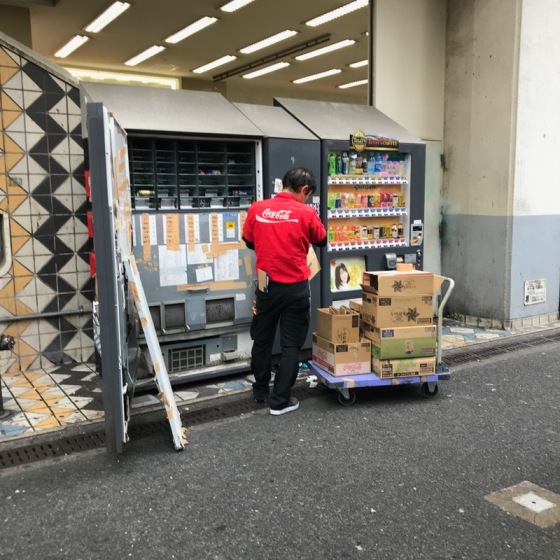 Filling one of Tokyo’s vending machines.

Sculpture of children playing, and behind that, the Tourist Trailer.

I duck my head in the tourist trailer which has a young woman at a desk inside and a long bench on the other side, filled with people just sitting there.  After she gives me a map of the area, I ask “Tired travelers?” and gesture to the seated group. She smiles and nods, but this is a truth: there are very few benches or spots to sit down in Tokyo. 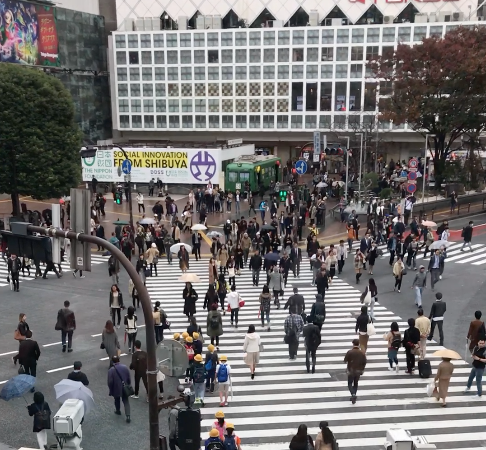 I exit, and try the Shibuya Scramble crossing.

Then I cross back, and watch the coordinated neon videos of Sing A Song across all the buildings surrounding the intersection.  Then I cross back again, and head up into Starbucks to get a video of it; I’m not alone in this endeavor, but the day is gray and the vantage point is crowded and not high enough, so I give up.

I still like the Ginza scramble intersection better (above).

Looks like I’ve arrived at Basketball Street, along with one of the postal workers delivering mail.  It’s weird to be in one very large intersection that is plainly visible on the map, yet be completely disoriented.  I’m looking for my brother’s sushi place, and head up a street, only to be thwarted.  I’m worried about running out a) battery on the iPhone or b) battery for the Hot Spot, so try not to rely on the directions I get on the phone, but instead, try to “feel” my way there.  It’s upstairs, down a hallway, almost kitty-corner from the Basketball Street, and there’s a two hour wait.  Nope.

So I try Soup Stock, a perhaps fair-to-middling soup/hot meal place (did I mention it was drizzling all day, or perhaps you could see that from the photos).  It was my goal to sit down, take a break, and re-orient.  This was the place where you got in line, ordered, stood there, and they handed you a tray of food.  I had to watch a few people to get the process.  But I had initially walked in, not knowing this, picked up a number from the rack, got my water and set it on a table at the back, past the long communal table (too hard for someone who has no language skills, and besides it was up on bar-level stools).  I didn’t know if my stuff would be safe while I ordered, so I carried it up to order and retrieve my food.

The dish of food — butter chicken and rice — was really good.  The lady at the table next to me left to get some water at the front of the restaurant and left her purse, her stuff, all out there in the open.  I’m beginning to understand that people aren’t worried about them of their belongings here.  This is a foreign concept to me, who lives in the States, but what a lovely idea it is, to live so freely.  On the other hand, it is true that Japan feels very OCD to me, with all its bowing and rules and everything, but that is also free-ing in other ways.  Lunch over, I pack up, clear my tray to the counter for dirty dishes, and head out again. 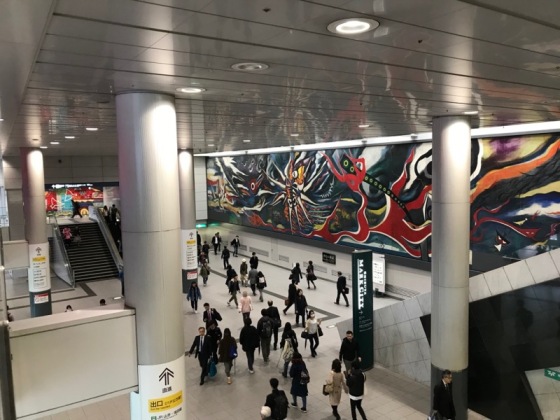 This shopping/eating area I’m in is attached to the train station, so I walked through this large, mural-ed area, then decided to visit the food mall of the TOKYU Department store.  I didn’t know anything about it, but was still looking for eating chocolate, which so far had been elusive.

Nothing that caught my eye was in the Food Mall, except for strawberries that were $9/small container.  I found out later that they were a special treat at this time of year, but generally we found all the produce to be very expensive here, as we are spoiled by California’s abundance and prices.  I finally did find three little disks of fancy chocolate, but that wouldn’t be enough to keep us happy this week, so I resolved to keep looking. 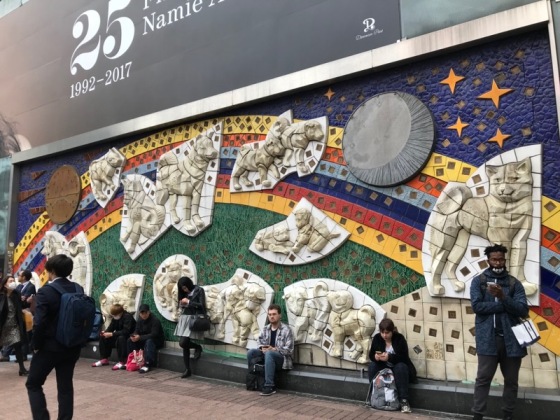 Back out on the street, I thought this wall, dedicated to Hachiko, a faithful dog, was beautiful.  Unbelievably, I missed the actual statue honoring the dog, as is so often the case when wandering around disoriented.  But apparently this is a much-overlooked memorial: “The original design was created by Ryutaro Kitahara, a suiboku (Japanese-style ink painting) artist. He imagined what it would be like if Hachiko had an extended canine family and painted around 20 Akita dogs to accompany the famous pooch, along with a sun, moon, stars and a giant rainbow. Not all of the dogs made it to the mural, despite its impressive size. It measures 4 meters high and stretches 11.2 meters across, and is compiled of over 1,200 Shigaraki ware ceramic pieces.”  (from here)

Seen  on the street (and in other areas) was this Black Cat pushcart.  I found out they are a luggage delivery service.  One blog writer mentioned that she used them to get her luggage from one hotel in Tokyo to another, as very few bring much on the subways (we noticed). 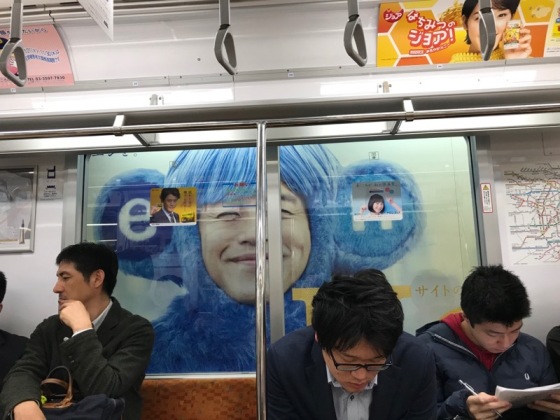 Arriving at my regular subway stop, I followed a hunch and came up into the Mitsukoshi Department Store food hall.  I browsed all the small booths, going up and down the aisles.  At one, they brought out a small plate with three dots of chocolate truffles covered in cocoa.  I tried one…then another flavor..and the bought two boxes of Satie chocolate: one dark, and one milk chocolate (for Dave).  She held up a placard after my sale, which said “No butter or cream in these chocolates.”  Then what? I asked.  She replied in English: “Yogurt and Coconut Oil.”  Whatever: these were delicious.  She offered me one more small dot for the road and I was back outside again.

I ended up across the large street from our hotel, but had to walk down to the next corner to get across.

I followed a woman with a most unusal skirt, as she walked with two companions.  It was like a swirl, the fabric draped in a circle around here, with a angled piece at the lower right (barely seen above), so that it was like a vented skirt.  Such stylish clothing is everywhere.  This woman was easily 70 years old, and still dressing up in tights, pumps (everyone here wears pumps!) and this very cool skirt. 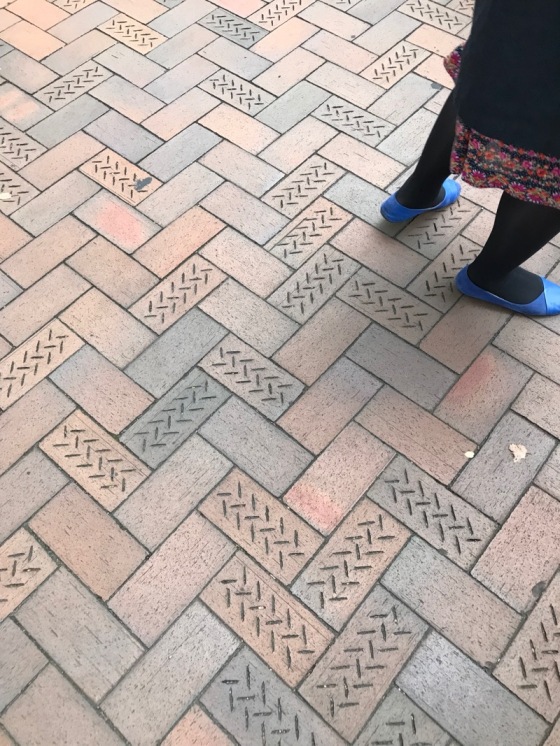 At the corner, there’s anothe woman with electric blue shoes.  (I also liked the bricks.) 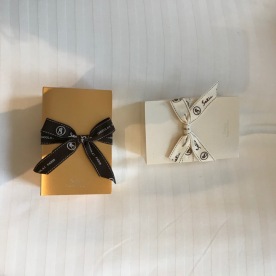 The Satie bag, wrapped for rain (L), and the two boxes of chocolate truffles (R)

Dave had beat me back to the hotel room, bringing this fun can of lemonade (the dots and the yellow!), and a sweet treat, which I don’t remember now.  We head out, with me taking photos of the manhole covers: 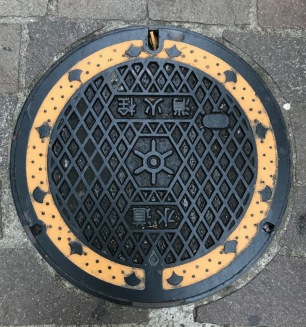 It’s twilight in the Ginza and the streets are coming alive.

See the Karts in action.

We stopped by Uniqlo for a couple of T-shirts and warm socks.  The people-moving process in this store is not particularly streamlined: up (or down) on escalators, with the occasional use of an elevator (if you are old or have strollers).  We’d decided to buy socks first (higher floor) then T-shirts afterwards (lower floor), then found out if we’d purchased a bit more we could get it tax-free.  Back to a higher floor, then a lower floor, all to get The Deal.  The socks for me were wonderful, keeping my feet warm and cushioned while we walked around Tokyo (and even chillier) Seoul.  My feet hurt constantly on this trip, joining the complaints about a recent trigger-thumb I’d developed, so I was really grateful for cushy stockings.

These two cool faces were in the Hermes windows, and were made of ordinary objects.  Below, a side view giving hints of what the boy was comprised of.  We went back and forth looking at the side view, then the front view.

Up in the next block was the retail temple at which I worshipped nearly every day those next few days: Itoya, a uber-stationary store. 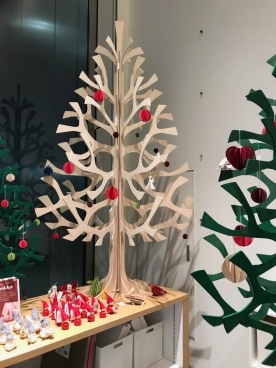 We learnt our lesson from Uniqlo, taking the elevator all the way to the top, then walking down all six floors, looking at each floor’s wares as we descended.  I have in my journal a giant sticker from this store in the shape of a red paper clip: about 1-1/2″ wide and 7″ tall.  For a gift purchase, they’d place it in their signature paper bag and fold this paper-clip sticker over the top, securing the flap. I wised up: many of the objects we bought immediately became gifts.

Floor Six of this building was a fabric shop.  I was back there later that week.

Fancy store fronts along the Ginza: we are starting to see snippets of Christmas decorations appear.

A pair of giant Yeti feet.  See them in action, here.

We decided to try the restaurants on the top floor of Mitsukoshi Department Store.  We took the elevators up, then had several to choose from.  We ended up at one called “Dim Joy.”  It was. 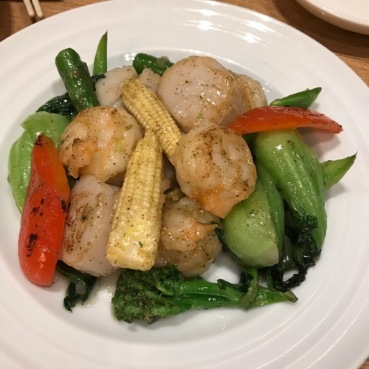 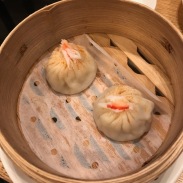 What is “Jasmine Aroma?” we asked each other.  Above, pictures of most of the food.  I did have an obscured view of the Nissan Building, but that was about the most redeeming visual feature.  When we finished our meal, Dave said he kind of had a rule about eating out: you should feel full afterwards.  He didn’t.

So we stopped by the waffle shop and each got a “gaufre.”  Then he got one more. 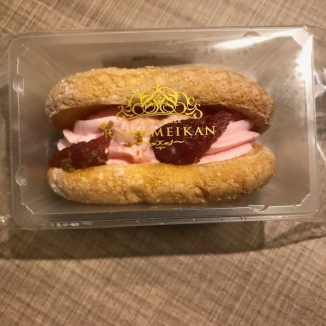 I bought an eclair-looking thing in the next shop, filled with raspberry creme.

Or strawberry.  But the best part of the treats experience is that now, we have chocolate!