From the excited voice of the Italian lady behind me, I was to assume this was NOT a good thing. We were diverted to Bologna (The pilot told me “We couldn’t land because the wind was coming from the wrong direction.” A scientist, traveling to Dave’s conference later told me “He couldn’t land because this was a code share with Dolomiti. Welcome to Italy.”) and after milling around for an hour another voice came on the intercom and said “Blahblahblah busses primero blahblahblah taxi stand.” 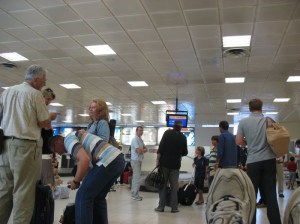 Here we are milling around Bologna. Notice on the left the black tube on that lady’s back? That’s how I knew that group were scientists, traveling with their poster tube to ICEM, the conference Dave’s at. I was really happy to see them. You can depend on scientists. I shared a cab with one and the cranky cab driver: “Notta two fares! One fare!” Oh yeah–well I’m not hopping around Florence alone at 10 o’clock at night, after being in the fascinating Bologna airport, the hour-long bus ride over the Appennine Mountains–or under them in a succession of tunnels–in a giant bus gliding within inches of large square trucks while coming down a mountain.

Well, I made it. I kept thinking. I spent hours on hold and talking to AT&T so I could use my phone in Italy and then I couldn’t figure it out? I ended up borrowing a phone from the guy beside me (paid him 2 euros) to call and leave a message at the hotel. Wild.

This is the view out our bedroom window. We have a winner in this hotel, not only for its location (2 blocks from the Duomo) and its view…

. . .but also for its breakfasts on a terrace with the view below. 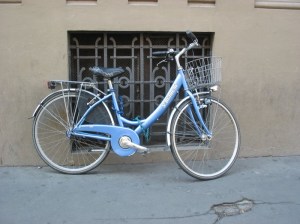 I walked Dave to his Congresso place where the ICEM conference was being held, and on the way back saw lots of bikes, some chained to the window grates. 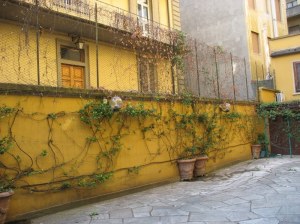 Curious, I head down to the Duomo, in the heat. By the way, did I mention that Cairo, Egypt was 100 degrees yesterday? So was Florence. I was also looking for hair spray, because after all my lists and planning and packing–I forgot the hair spray. Lacque, is what I think it’s called and the first two shops by the Duomo wanted 10 euro for a small bottle. Yeah, right. That’s about 15 bucks, American money. Finally found some later for about 2 euro.

Looks good. I’m wondering how many of these cups of gelato I can eat and not keel over from a heart attack. We’ll see.

Guys waiting to sell original artwork to unsuspecting tourists. This year’s crop of pictures are large, and all include draped nudes, a la Hugh Hefner. Whatever happened to Italian scenery?

I feel your pain. She has held up that piece of the wall for centuries now. I’m reminded of the front of the church in Orvieto, but Orvieto’s cathedral has more golds and reds. The Duomo is in greens, pinks and white. Someday I’ll have to post those 2007 pictures from that other Italy trip. Yep, some day.

Walked past this on my way to find an ATM, the other necessity for tourists. There’s always a moment of panic when you insert your card: will you get it back, or will the machine eat it? Or will they treat it as a cash advance and start charging you big bucks? I talked to the lady at the Tourist Information Center and she said it’s called an International Transfer, or something like that, and gave me the name of three banks. Only she said DON’T go to one of them. She’s thorough. I obeyed and got some money. 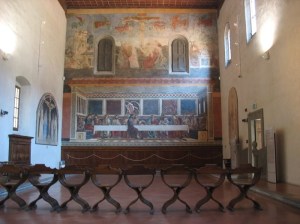 Since I’ve stood in lines for the David and for the Uffizi before, I decided to skip those and look at some lesser known places. This was a former convent: Cenacolo de Sant’Appollonia and one wall has Castagno’s Last Supper. There’s a lot of Last Suppers around Italy.

Exit doorway for the Accademia. Love the roundrel over the door coupled with the grotesque mask-like painting inside. 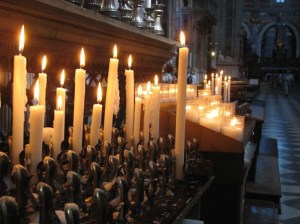 This is from the interior of the church of the Santissima Annunziata, from 1444. Newlyweds bring their wedding bouquets here to ensure a happy marriage. There were a few around the other side.

Lunch, from a mercado consisted of fresh foccacia bread with mortadella. I bought tomatoes and lettuce on the side to add, along with a gala apple and a bottle of the Medici’s finest water. I ate in the plaza just outside the church, a pleasant way to spend a few minutes on some shady steps.

Then over to the San Marco museum to see the Fra Angelico frescos. He was a monk here, and considered painting to be a form of prayer. That observation from Rick Steve’s guidebook, made me think about the concentration it takes for the creative arts. Fra Angelico made his prayerful painting a main part of his life. Coming up the stairs to the monk’s cell, the famous The Annunciation greets you. It is amazing–so much better in person. This was worth the whole trip to Florence, even if I never see another thing. I swayed back and forth, just like the guidebook said, to see the angel’s wings sparkle from the glitter mixed into the fresco. Oh my. The depiction below is from the web, because I was trying to adhere to their no photo rule, but it was okay to take pictures of the outside.

This was the Medici’s cell where they prayed. It felt sort of outside–what can I say? They had signs everywhere announcing that the upstairs (where all the monk’s cells were) would close at 1:40 and the whole San Marco museum would close at 1:50. So while I’m standing in the gift shop, buying my postcards at 1:20 p.m. the saleslady starts draping everything with her red tablecloths. Okey dokey. The tourist next to me mutters under her breath, “Welcome to Italy.” I selected mine quickly and beat my way out of there.
From the sublime to the giftshop.

The massive lines for the Duomo had disappeared, so I went in and did my tourist thing. It’s basically a big empty church, with tons of tourists, including the American girl (why is it always Americans?) trying to argue her way out of wearing a “poncho” made out of that cheapy recycled stuff. It’s posted EVERYWHERE that there are no bare shoulders in churches, and she was trying to convince the guard that this wasn’t really a church. Just put the poncho on, sweetheart.

Duomo, outside. It’s real name is the cathedral of Santa Maria del Fiori.

Duomo, front. Did I mention the crowds? Oh, there’s some crowds here, but I was feeling pretty good then, because I’d had a granita: basically a highly flavored icy thing, that is slushy and you eat it with a spoon. I had peach mingled with lemon. Their lemon is very tart, but it was really refreshing up against the sweet peach. I avoided having a gelato with this, but I wasn’t disappointed at all–it was just perfect for this very hot day in Florence.

After a break, I decided to go and see the church behind us, San Lorenzo. It’s an interesting church, somewhat noble in character, but surrounded but TONS of carts selling genuine made in Florence Indian scarves, belts, earrings, pashmina, sunglasses (I’ll bet you didn’t know Florence had a sunglass factory too!) and all other worldly goods, but all handmade right here in Florence. 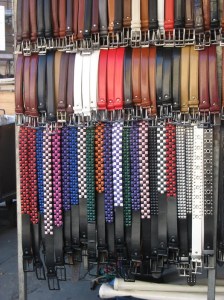 I think Dave would really be styling with some checkerboard belts.

I kept thinking of the time when Christ cleared the moneychangers and others from the temple. Not that these guys are in the temple, but it just crossed my mind. I’ll bet the people in the church would love to have a fraction of the day’s receipts to spiff the inside of San Lorenzo–but it would be an uneasy partnership at best. 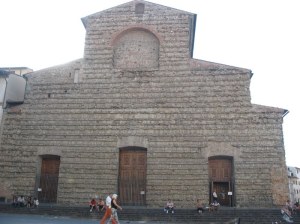 The front of the church. Apparently there was a design by Michelangelo, but obviously it never was added. 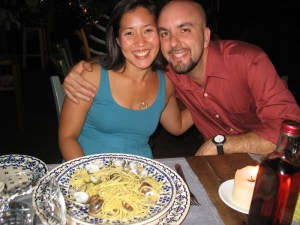 We went out to dinner with one of Dave’s former post-docs, Drew, and his fiancee, Lisa.

Dave and I shared a mixed salad first, then he had rigatoni, and I, the gnocchi verdi (below).

Then we split the swordfish with potatoes. After dinner, we all walked over to the Duomo area, joining in the other one billion strolling Florentines and tourists. It’s still hot, but we’re tired, so pass up their offer for some gelato and head back to the hotel.