We began the hot Florence day in the early morning, beating out the nine gazillion other tourists down to the Duomo and Baptistry. I think I counted five other people, besides the garbarge and street cleaner trucks out there in the plaza.

Directly across from the Duomo is the baptistry with its door of bronze (that are golden). Michelangelo was so impressed with the designs that he called these the Gates of Heaven. The reliefs are vivid and interesting, as in this panel, where Moses receives the Ten Commandments on Mt. Sinai.

Standing beside the Duomo is a capanille called “Giotto’s Tower,” although I’m sure that’s the slang name.

The street carts are heading out to ambush the tourists. I read somewhere that most of the goods available in the markets are from South America, designed in Italy, and sold by foreigners. I began to despair of ever finding a suitable souvenir as one of my requirements is that I be reasonably sure that it was made somewhere in Italy. 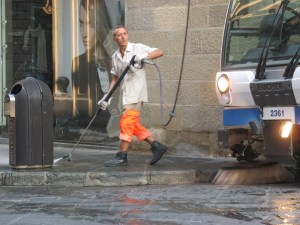 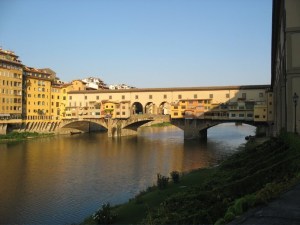 Ponte Vecchio bridge. I like how the backsides of the shops are pushed out, held by struts over the water.

Luccheti d’amore.
These locks, lovers locks as they are known, testify to the love between two star-crossed, hormonally driven teenagers who against the regulations of Florence (and chancing a 50 euro fine) lock these onto the monument to Benuto Cellini then toss the keys into the river, kind of like a modern-day Romeo and Juliet. 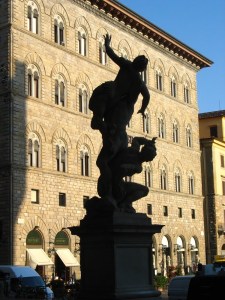 Back to the Plaza della Signoria and the statue The Rape of the Sabine, one of my favorite statues because of the twisting, turning sinuous shapes and the ability of the sculptor to portray compressed flesh, which must be very difficult to do in marble.

Back to the hotel, and breakfast! 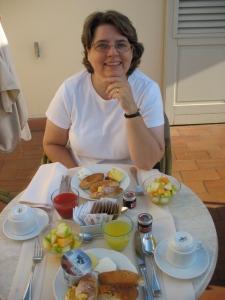 I head past a traditional open air market on the way to my cooking class. 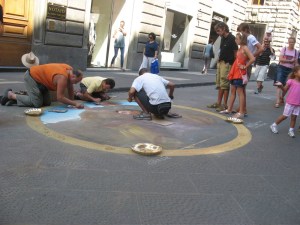 I guess it’s like color in the blanks, if you go over the same spot every day, your art washed clean in the morning by the street sweepers. 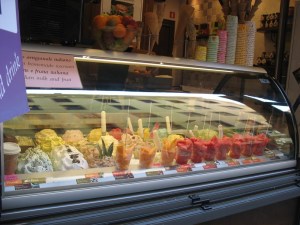 And here are my classmates at the in Tavola cooking school (which means on the table). Two energetic cooks actually got seventeen of us to turn out a lunch of two kinds of homemade ravioli and fresh orecchiette pasta.

The first 1o or so were torture to make, but about the time I had shaped 50 of them, I was doing better.

My turn at the pasta machine. Chad, I will reveal all my secrets to you on Elizabeth’s Kitchen when I get home, even how to get it to go through the #6 setting with ease.

The orecchiette, with fresh tomato sauce. 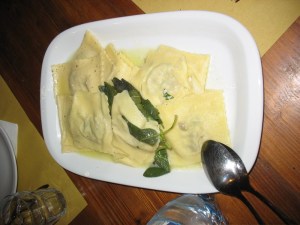 Ravioli #1, with an eggplant-ricotta filling (which was good). 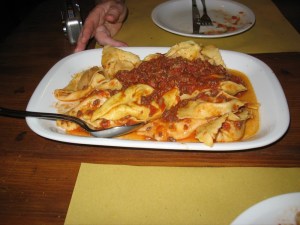 Ravioli #2, which we shaped into little bundles–it was stuffed with potato (not my favorite). 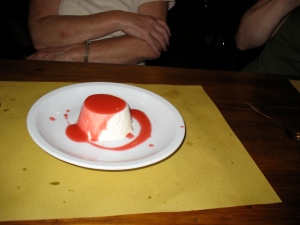 And we had Panna Cotta for dessert, and yes we made that too. Recipes to follow.

Rachel, originally from United Kingdom, is currently living in Florence, but hails from Tucson Arizona, where she had lived for 20 years; she’s returning there next month. Small world. Her mother sat at our table along with a woman from Great Britain and we had an invigorating discussion on health care.

Finally made it into San Lorenzo cathedral, and I was rewarded with this sublime ordering of architectural elements. Delicious. 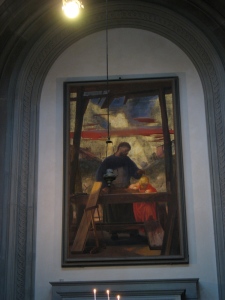 And one of my favorite paintings, St. Joseph with Jesus. I like how the board they are working on in Joseph’s shop extends upward into the light and shadows as a portent of the cross. It was painted in 1966, and seems to be one of the few contemporary art works in these churches.

So my entry ticket was good for the treasury too, but no photos. I had to sneak this one. I know it’s blurry, but you try and focus and turn off the flash and turn off the sound while the Photo Police are lurking in the next room. This reliquary has flourishes, silver lillies, scrolls, cherubs, leaves, garlands, a crown and rubber band to hold in the locket on the little guy’s chest.

I just had to show you the rubber band. I know now why San Lorenzo charges for entry–apparently like all the other churches, but maybe not enough. A rubber band. That’s the kind of home repairs we do around our house sometimes too. It endears this whoever to me, the person who chose a rubber band as their fixit-tool of choice.

We met up with some colleagues and former post-docs of Dave’s and all went to dinner at ZaZa, where we had a three soup sampler of Tuscan favorites, and a dish of mushroom fettucini. Too bad I forgot to take photos, but we were hungry. 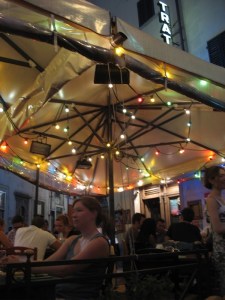 It’s on the plaza near the Mercato Centrale, so the eating is outdoorsy, and every once in a while we (thankfully) had a breeze. This shot is the series of tables next to us, with fun colored lights.

The gang. All in white (well Dave’s shirt is a light plaid, but it photographed white).
Night!