We’re ready for another walk this morning, so we head over to San Lorenzo to see it before all the carts in the mercado arrive (hopefully). Not quite quick enough. This one looks marooned.

The buildings opposite cast shadows on its rough exterior. Found out why the exterior design by Michelangelo, four years in the making, was never added. They ran out of money. Being from California, I can relate. 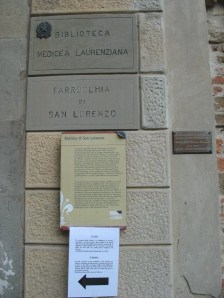 Dave’s with me and the little man who opens up the church to cool it down for the day, has several doors open. This series of signs indicates what’s what, especially the small sign to the right: the exterior lighting provided by the Florence Lion’s Club–Borgelle chapter.

This morning, in the quiet and the calm, I obtain a good photo of my favorite painting. That’s not to say that aren’t more worthy paintings in the church. I like Joseph about to place his hand on his son’s head, the fact that they are working together in the workshop, the foreshadowing of the cross.

As a parent I don’t know what will happen to my children, don’t know all of their crosses they will bear, but I like to imagine my hand on their head, and saying what I can only imagine Joseph is saying to his son. For every child it is different, but must include something along the order of wishing to carry their cross for a few lengths while they rest up for the difficult journey ahead. Joseph could no more carry that cross for Jesus than I can carry mine for my children. I only hope that there are workshop moments, where they remember the touch of my hand, laid aside their head.

Back for breakfast, shower and Dave and I make a couple of stops on the way to his conference. First up? Santa Maria Novella. There are some lovely things in here, but of course, no photos. Come to Florence and see for yourself, especially the series of frescoes behind the altar and the cross by Giotto, hanging midway down the nave. Masaccio’s Holy Trinity, a fresco along the left side of the nave is a prime example of his new views on perspective, something he figured out intuitively and would be expanded upon by other Renaissance greats.

We head to Mercato Centrale, a large warehouse-style building, and on the way see a lovely tableau of wild animals advertising a butcher (below).

We buy a belt for Dave at the markets and I tell him about Museum of San Marco, so we hike/head over there, but it’s closed on the 2nd and 4th Mondays. Okey, dokey. I’d checked for regular Monday closings, but just not the other kind of Monday closings. 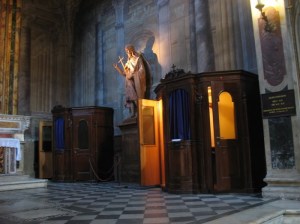 So, into Santissima Annunziatta again. The priest is saying mass, so we tiptoe to the back to wait by the confessional booths.

Here’s a photo of the bridal bouquets lined up on the altar, a tradition I mentioned in another post. (I took this after the mass was over). I said good-bye to Dave as headed back to Science. I realized that I was going to miss seeing the interior of Santo Spirito AGAIN (missed it last time I was in Florence), so map in hand, tennies on my feet, I booked it across Florence.

The guide-lady met breathless me at the door. I held up one hand. “Cinque minuto?” I asked. She nodded. I was in. The church’s interior is similar to San Lorenzo, designed by Brunelleschi again, with its classical gray columns against the white plasterwork. I bought a postcard, looked around, and it was time to go.

It’s a plain-looking church outside, with just the bones of its design to recommend it. Last time I was here was when I was working on my honors thesis as an undergraduate; the project would combine poetry and photography in a handmade book (of which I still have two copies). I took tons of black and white photos of this church and spent hours in the darkroom dodging and burning the old fashioned way, with paper, hand, cardstock, whatever I could find to bring up the crisp contrasting angles of this design.This church is an old friend.

Lunchtime brings with it all kinds of choices as a tourist. Do you go the easy route and find a nice restaurant and sit down and have break? Sometimes. Today I investigated those possibilities, but was drawn to this little place, catty-corner from the church. It’s run by this nice woman–love her pizza clock!

Bruschetta Pomodoro.
This was food from the gods, I’m convinced. Paired with a Schweppes lemon soda, I was in heaven. After lunch I hightailed it back in to ask her how it was made, after telling her it was amazing! Chopped tomato, olive oil, salt, oregano, fresh bread–toasted, some basil leaves for garnish. For this to work, each ingredient has to do its part: the tomatoes have to taste like tomatoes, the olive oil has to be of high quality and so on. This is why Americans go dotty for European food–it’s the taste! The grand total of this bill was 2.50 euros for the bruschetta (bruss-ketta) and 2 for the drink. But the taste was divine.

I was intrigued by this store, selling seeds, herbs, ingredients, hats, cooking tools. I could buy something Florentine here, I think. I try on hat after hat, the lady helping me. I finally choose one and only later realize it’s very much like my mother’s favorite straw hat. Of course, I don’t look like her in it, because I have a lovely round-round-round face, but I smiled when I thought about it. And yes, it is MADE IN FLORENCE!!

Next up, Brancacci Chapel. I was supposed to have reservations for this. I don’t, I confess to the man behind the window. No problem, he says. There’s a movie I could watch, but I have Rick Steve’s guidebook and feel confident enough with that, so I tell him I’ll watch it afterwards. He points across the cloisters to where they’ll take my money, and after all that, I head up the stairs into a darkened church interior. To my left is the chapel.

Massacio’s frescoes quiet the soul, with their depiction of scenes from the Bible. This one of Adam and Eve in their grief as they are expelled from the garden, is simple, yet I think reflects their agony. 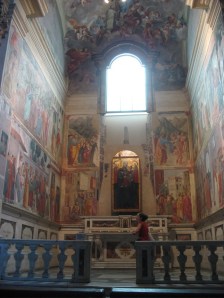 My favorite though is on the left wall, and is The Tribute Money. Not only do I like the subject matter, but the way it’s portrayed is intriguing, with the main scene in the middle and subsequent scenes in that timeline on the left and on the right. Head to the link, as my photos don’t do it justice. 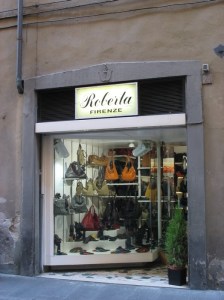 This is the site of another outstanding experience in history: its where Elizabeth finally purchased her real live leather purse from Italy. (And Christine, it’s yellow-gold!) I’ve mentioned–no, moaned–to Dave that for all the times we’ve been to Italy, I’ve never gotten a real live leather purse. Oh, I bought one in Venice last trip, which I firmly believe was made in China even though it says MADE IN ITALY on the front. It looks like all the other ones in the markets.

But this one is supple, beautiful leather with a cool handle. Another life milestone achieved. When I stopped at another shop, she saw my bag from Roberts and said, “Roberts have nice fabric.” I agree, even though I think she meant leather.

Santa Felicita Church is the next-to-last official stop of the day, where outside is this little car. Inside, Pontormo’s Descent from the Cross hangs in a teensy little alcove to the right of the front door. One euro will illuminate it for a long time.

Pontormo was one of the Mannerists and his wierd combinations of colors and supple skewed limbs are a hallmark of that style. I love this painting too, having seen it the first time after taking two Art History classes at RCC, my local community college from a 70-year old woman who had no degree in art, but instead had a passion for it, which she communicated aptly to me. I wrote lists of things to see while in Florence that year, and this was one we had studied in class.

But seeing slides of it in a darkened classroom can’t prepare you for how the painting looks in real life. It’s stunner, which still moves me.

Last stop: Santa Croce. I come upon it from an angle. 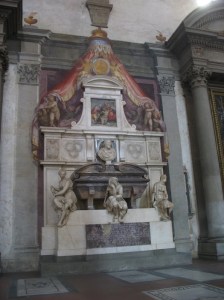 They let you take photos in here–just no flash, which I think is a more reasonable approach. This is Michelangelo’s tomb. The common belief is that he would have hated it, tricked up as it is. He was more about simplicity, I think.
I wish now that I would have taken photos of Galileo’s tomb, since today is the 400th anniversay of the invention of the telescope. (Thanks, Google.)

The light from the stained glass window casts colorful rays across this fresco of Mary heading to the church.

Cloister views above and below. 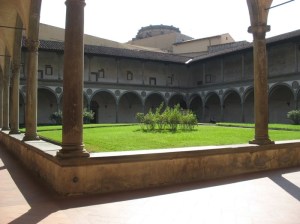 Beyond tired, with every part of me sore and achy and very very hot, I don’t even have enough energy to walk up to get a granita, THAT’s how tired I am. It’s five o’clock, but I’ve done everything on my list, including getting a purse. I can now leave Florence happy, right after tonight when I hope to convince Dave to get me one more granita. 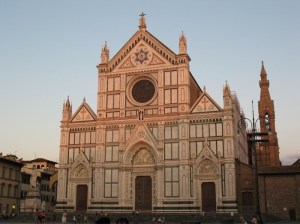 Dinner? We do a re-run at the restaurant near Santa Croce (don’t worry, I took a break for a while).

To get there, we cut through Plaza della Signoria, with its Palazzo Veccchio building, all aglow in the evening sun (this is what we were waiting for last night, but we were off by a day for the Florence Glow-Show). 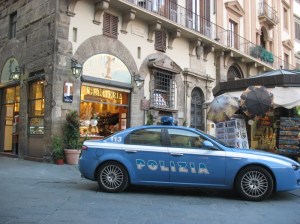 This cop car made its way down the pedestrian street, pulled over and the two policement went into the Gelato Shop. I guess they don’t do donuts here. 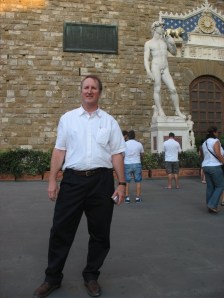 Two Davids. But mine’s the real one (the other is a replica of what’s in the Accademia). 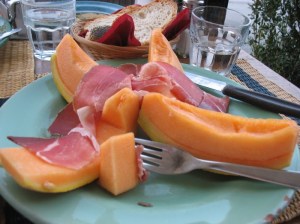 First course for me: melon and proscuitto.

For Dave it was a salad of peccorino cheese, walnuts and pears atop a mound of greens. 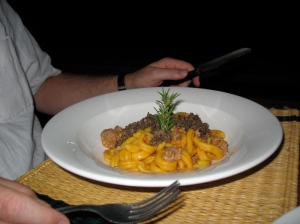 He had a pasta dish with Tuscan sausage and black truffle. Love the perky little rosemary twig for garnish. 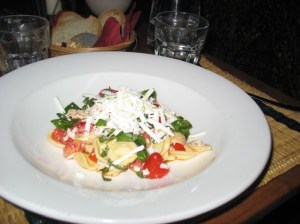 I had what he chose last night: homemade orecchiette pasta, tossed with arugula, basil, tomato and topped with fresh grated ricotta cheese. Yes, it was the texture of mozzerella, and delicious. 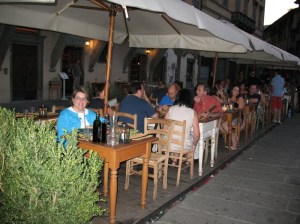 On the way home, we stopped at the latest, most trendy, gelato store: GROM, and ate our teensy servings on the steps of the Duomo. And yes, we found the energy to walk up and buy a granita: strawberry and almond.