Up slowly, we realize we just can’t keep up a horrendous pace and still come back in one piece. The bells on this Sunday morning are calling the faithful out to mass, and after breakfast, we head out ourselves to the Bargello Museum. It was built in 1255 as an early Florence police station, and then a prison. Given the surly expressions of some of the museum staff, I can only surmise that some of the early history has been carried forth. 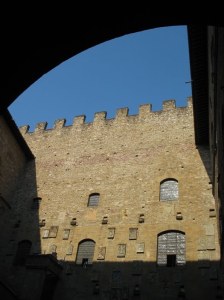 The courtyard, with lots of sculpture, stone plaques on walls (Dave calls them Merit Badges), and a mesh-covered water well in the center. You’re getting pictures of these items because we can only take photos “outside.”

Dave, looking out a window, technically qualifies as outside. He looks a lot more chipper than I do. I look a thousand years old today, which is why the photo of me that you get is in the middle of this gate on the courtyard steps (below). Touristing really does take its toll on this middle-ager.

Time for Dave to go to his conference, so we part ways. I head over to San Lorenzo, because the Laurentian Library was open, a somewhat rare occurance, apparently. I learned about this when I took art history some 14 years ago, and still remember the slides of the graceful and curving steps designed by Michelangelo.

Cloisters. I loved the orange tree in the middle of the courtyard.

The steps. This area would allow photos, but no flash, so the only light was from the windows in this two-story entryway, or from the doorway. The simplicity of this staircase is its beauty. I lingered here, enjoying the proportions, the curves, the gray stone against the white walls. Michelangelo could do so many things well. 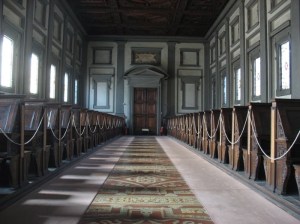 The library, midway down the room from the upper landing. They were doing restoration on some windows, so I moved past the scaffolding to take this. The floor is mosaic/pieced and the room is lined with carrels (now roped off). 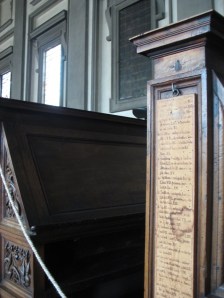 At each carrel is a listing of what books were stored there. They were chained to that carrel, but now are all moved into another part of the library, properly stored. But they still have their chains. 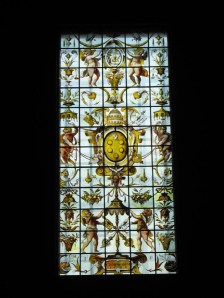 The small hidden rotunda was open for a video exhibit about the illuminated manuscripts stored here. The Medicis, who gave money left and right around Florence, and who financed this church and Mr. Michelangelo, left a good legacy with their wealth. Their shield has little circles, that sometimes look like balls, and are a representation of how they started earning their riches: as doctors (medics). 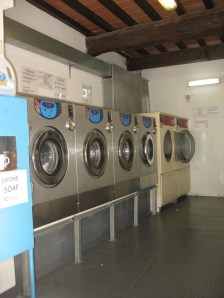 The pause that refreshes a tourist: the laundromat. 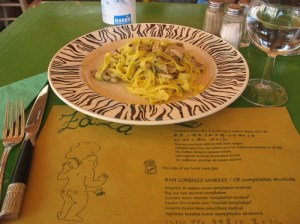 And afterwards, lunch again at ZaZa restaurant. This picture of fettucini with porcini mushrooms is what Dave and I shared last night at dinner. I went for a re-run. Boy was it hot this afternoon, and no breeze, unlike last night.

So, I went out for a granita. A granita is a slushy flavored ice, which is what a Slurpee wants to be when it grows up. Anyone out there have a recipe for this stuff? I like it better than gelato, and it’s probably better for me, or so I tell myself. I could have 10 of these, they’re so good. Today’s was strawberry combined with almond.

The afternoon found us heading up to San Miniato church, on a hill overlooking Florence. 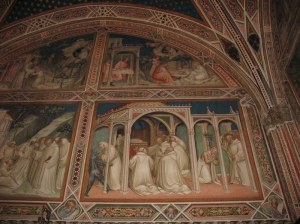 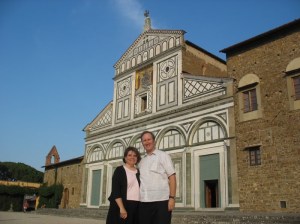 I figured out how to set the timer on the camera so we avoid those ghastly “will you take our photo” photos from other tourists. We’d gone up there to hear the monks do their chanting, but it was underwhelming, so we reverted from religious pilgrims to American tourists again.

Then, another shot, with the timer. You may see this again on our Christmas card.

A guy with a tripod and a camera with huge lenses offered to take our photo. He obviously knew what he was doing. We are now at the Piazza Michelangelo, below the church. There is a gathering happening, of all sorts of folks. They wait for the sundown to see Florence all aglow, but with the haze, we’re not so sure it’s going to happen. We still wait around. 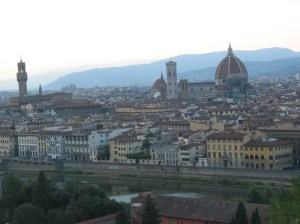 It’s like a sedated rock concert up there on the steps, with the guy singing James Taylor, sometimes badly. It’s like we’re all waiting to be beamed up, or something. 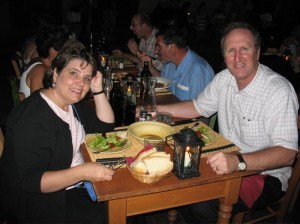 We decide to head down instead, with the help of a taxi, stopping at Santa Croce plaza for dinner at a restaurant recommended in Rick Steves’ guidebook. If you head to Florence, borrow mine. It will save you more than once, and has great “tours” of the museums.

We ended the night walking past the Duomo, and went back to our hotel.