Thought I’d show you the doors going into the Metro stations from the street.  They pivot on the center which means, now that we’re having a heat wave here, that they can prop them open to get a breeze into the extremely hot and muggy Metro Stations.

Just outside the Metro, Dave spots this urban art: snake on a wall.  We begin our Frommer’s Walking Tour with the bank, and I thought Dave’s photo (below), capturing the upper balconies in so many different soft colors was lovely.  We found four Montreal different walking tours online at Frommer’s, and while we didn’t follow them all, they were helpful to know what to see, what to head towards.  We’d also picked up their small Montreal Day by Day book which was invaluable (and also had some of the same walking tours).

Next stop on our walking tour of Vieux-Montreal (or Old Montreal) was this basilica.  Tourist whine: we had to pay to get in.  Tourist kudo: the apse (what you’re seeing above) is incredible, and in our pictures (this one’s taken by Dave) we decided it looks a Hollywood set.  But it was cool looking.

Pew Detail–carved figures in the ends of the benches

Dave had given me a portable tripod for my camera and we used it to great effect in this dimly lit place.  If you pick up a brochure at the beginning, it identifies all these carved wooden figures on the altarpiece; two which are shown in this photo to the left of the crucified Christ are Melchizedek and above him, Moses.  The polychrome statues represent St. Peter and St. Paul, as well as the four evangelists: Matthew Luke, Mark and John.

Those on the right are Abraham preparing to sacrifice Isaac and above him, Aaron sacrifices a lamb.  Mary is being crowned by Jesus.  It’s all very ornate, but because they use wood, it’s beautiful.  If you are interested in the details, visit their webpage.

The entry price includes a visit to the small chapel in the back which is more modern, as it replaced the original which was destroyed by fire in 1978.  The bronze sculpture at the front is massive, but I was more entranced by the elegant woodwork.

This is one wall, just as I came back from the small chapel.  While I usually hate to use my flash, I finally succumbed in order to see all the colors that this basilica is painted.  I loved all the different colors.

The organ loft that holds a huge organ.  Of course, I would have wanted to go up there, but better yet would have been to hear someone playing it.

There were a lot of tourists in there!

I decided to get a photo of us EARLY in the day because the weather conditions indicated that while the thermometer may read 87 degrees, with the humidity it FELT like 101.  Boy, howdy, were they ever correct. We kept walking, though, visiting the old courthouse with its stained glass windows in the judge’s chambers:

I was tempted to ask her to water me, instead of the flowers.

Notice that most of the tourists (us included) are walking (or attempting to walk)  in that narrow sliver of shade up against the building.

After lunch at the Marche Bonsecours, we dodged back to our hotel after lunch and did not emerge again until nearly 5 p.m., when we finished our walking tour of Old Town, and had an unremarkable dinner (but at least they had a jazz singer and a guitarist to soften the blow of okay food).

This is Place Jacques Cartier, with a statue of Lord Nelson on the pillar at the top of the street. (I used to live on a Lord Nelson street when our family lived in Lima, Peru–how’s that for a small world?) This “place” or square is pedestrian only and is rimmed by restaurants and small shops.  If hadn’t have been a billion degrees outside, it would have been more inviting.

So how did these people training do it?  I watched them go down the slope of the Place, switch places, and then run back up again.  Anything for a good workout, I suppose.

And just beyond the Place, across the street, is this view of Montreal.  We headed to the Metro. . .

. . .to attend the Montreal Jazz Festival, which was closing this week.  We thought we ought to at least catch some of it.

More Metro art, while we wait for trains to come out of that dark tunnel.

And when we arrived at Place des Arts, more art.  I’d done a little research before going, so I knew to look for the art in Montreal’s Metro. 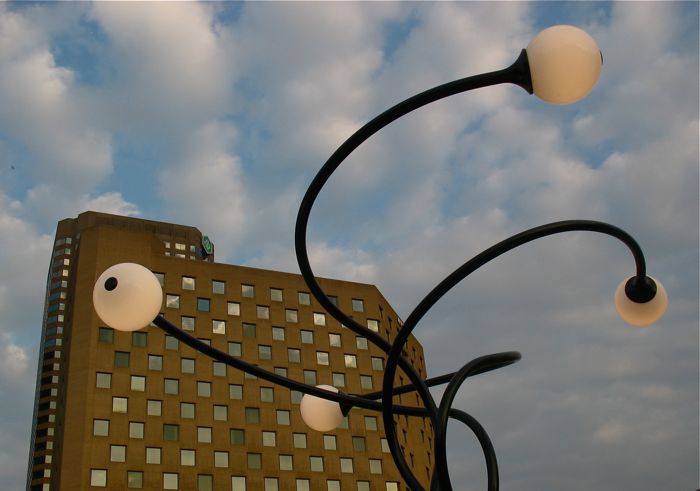 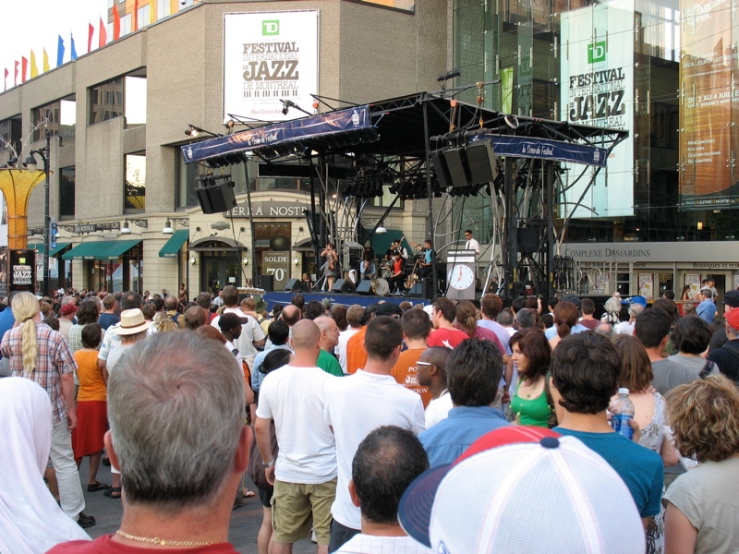 The Montreal Jazz Festival wisely had this free venue where lots and lots were gathered to listen to the music, or just to do something different.  We listened to “Cow Bop,” a County-Western band from California.

I’m trying to catch some passers-by to be-bop to their music.  I caught two. 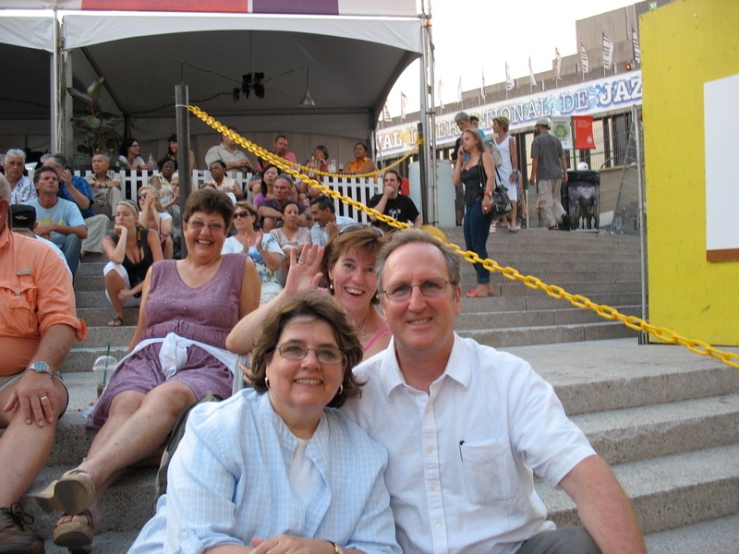 A friendly tourist took our photo and is our habit, we reviewed the shot in our camera.  Dave and I both burst out laughing when we saw the lady behind us waving in our photo.  I struck up a conversation with her: she’s from Boston, visiting the city, and is a quilter.  Like any proud grandmother, I whipped out my phone to show her pictures of. . . my quilts!  She did the same and we had a great conversation about quilting. Shortly after this, we left, making our way back through the swamp-like conditions of the Metro to our air-conditioned hotel.

As we sat in the Metro, I could swear that the gray tiled wall was slanting in certain directions, but Dave just said it was an optical illusion.  He’s right.  But I couldn’t stop staring at it.

1 thought on “Notre-Dame and Jazz”