“Okay, Dave,” I said this morning.  “Today is Eat Your Way Through Montreal!”

I’d been reading the guidebooks, the web, and had found several food items that seemed to be Montreal specialties, and since this was our last full day, we had to hit them all.  But first, a stop at the cathedral that we see from our hotel window.

This is the cathedral seen from our hotel window, with a spectacular name.  It was made in the image of the Vatican’s St. Peter, at 1/4 scale, apparently, and it is deja vu when you enter, complete with the baldacchino in the center.

Next stop: Première Moisson (which means First Harvest), a bakery that I’d read about.  Luckily there was one just kitty-corner from our hotel, deep in the underground underneath the Fairmont Queen Elizabeth Hotel (or Main Train Station).

I think just viewing this counter, with all its fresh baked goods, revived our flagging tourist spirits.  It was amazing.  We each picked two things and shared them.  Look for more pictures on Menu–Montreal.

Just around the other side of this massive U-shaped counter, with pastries, baked goods, sandwiches, tarts, cakes, desserts, salads and other amazing things, was an area with tables and chairs.  I loved the murals on the walls.

Revived, we took the subway over to Marche Atwater to see what this indoor market looked like.  In front were the city bicycles for rent–we saw several of these Rent-A-Bike stands.  We just looked, but I had fun looking.  Of course, since today is supposed to be hotter than yesterday, we concentrate on going where the heat isn’t–but it isn’t working.  The heat is everywhere.

Well, this place wasn’t Lyon with its amazing street market, but we did see some interesting produce.

And flowers.  Now I know they just BUY those rounded baskets, instead of painstakingly clip them into shape.

We headed back down to Old Montreal to go to this little church, Notre Dame de Bon Secours, where the theme is on sailors.  Ships in the stained glass and small wooden ships hanging from the beams (complete with two green votive lights) remind us of the impact of the sea on the early economy and on the lives of the early citizens of Montreal. 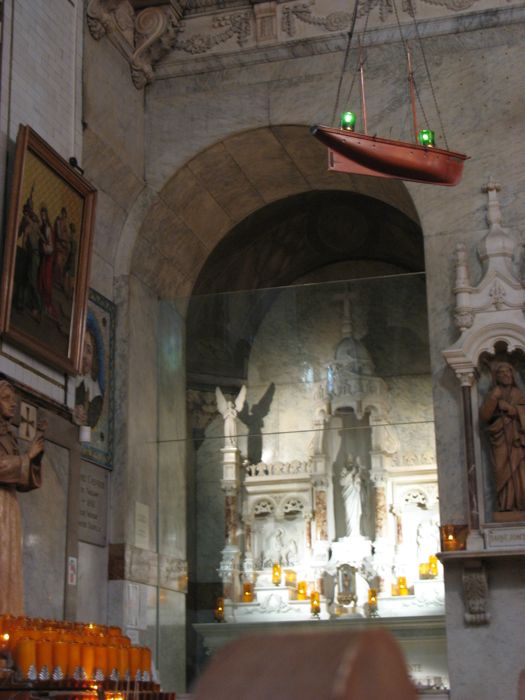 Detail of ship.  They have all kinds of these suspended from the ceiling: cargo ship, schooners, and several others I don’t know the names of.  This chapel was originally built in 1655, then re-erected after a fire in 1771.

Looking from the backside, the dome is the one with the figure on the top.  As usual, back home, I’m having a “should-have” moment, when I discovered that there is a tour to the top of the tower at the back.  Add it to The List.

We walk alongside these buildings, with a view of Marche Bonsecour in the background, heading to see the St. Lawrence river. 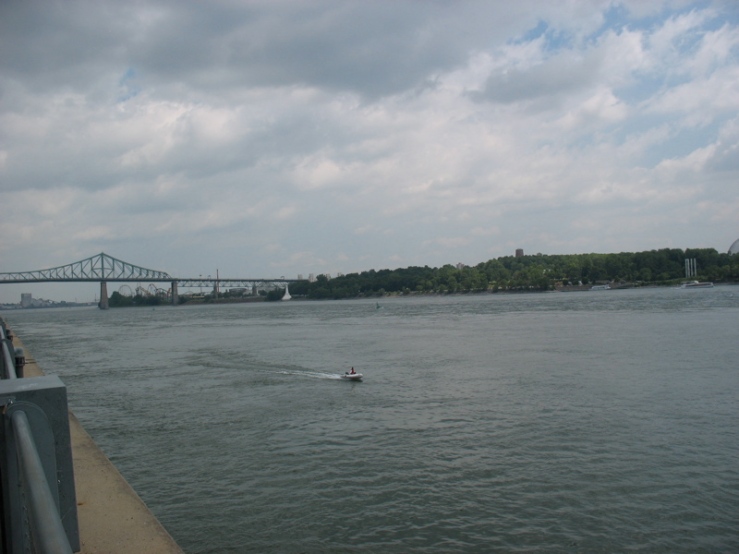 I can see why they call it the St. Lawrence seaway.  It’s huge, and while the section nearest us (where the little boat is) is fairly calm, the rougher water is moving very quickly.  We watched one boat tried to come across this section, engines full throttle just to stay in place until it could reach our side of the great river and navigate forward.  It was stunningly huge, and fast-moving. And it’s soooo hot.

This was very tempting.

It was so hot, in fact, that while walking back toward Old Town, we are interviewed on camera by a roving reporter for one of the local TV broadcast stations about how tourists are coping with the heat.  We make some chatter about being from California, but it’s not this hot there.  (We should have kept our opinions to ourselves, for the week after we got home, it WAS this hot here.)  We stood outside in the bright sun, the reporter capturing us on camera.

As soon as she was through with us, we made our way to Olive et Gourmando, another item on our list.  Check the Menu–Montreal to see what we ate, but here’s a picture of their dining room, which was a bit chaotic this very hot day. The fresh salad was just the ticket.

We tried to walk the underground, but after two dead ends, we opted for the Metro.  The Victoria Station stairs look just like the Metro in Paris.  Montreal is closely tied to France, I assume largely because of their language.  We were happy to take a break back in our air-conditioned hotel.

Continuing on with our quest to eat Montreal’s specialties, we head to St. Viateur Bagel, where the bagels are cooked in a fire-burning oven.  Just the thought of visiting a fire-burning oven on such a hot day seems crazy, but we must press on.

We shared a bagel, then went to the local park to rest awhile before tackling Poutine.  A few people were out, mostly dogs jumping into the large lake at Parc La Fontaine.  It was beautiful and we even had an occasional breeze.

French fries, fresh cheese curds and gravy to keep it all warm.  They have many different types, varieties and many different places serve them.  We were headed to one of the best.  Wikipedia says that “One often-cited tale is that of Fernand Lachance, from Warwick, Quebec, which claims that poutine was invented in 1957. Lachance is said to have exclaimed ça va faire une maudite poutine (“it will make a damn mess”), hence the name.”

We first walked past it (how could we have?) then went in the front door.  The smell of french fries hit first, then the sight of the cooks slinging potatoes into great vats of oil registered second.  We stood there, trying to decide.  A few people come in after us, and we tell them to go ahead of us.  The waitress looks at us, and Dave, ever quick thinking, asks to see the Menu.  Page after page of Poutine are listed.

There’s even a Poutine Matty with bacon, green peppers mushrooms and onions, which should make my son Matthew happy, who occasionally goes by this nickname. There’s even a Vegetarian version.  We really want to try this Poutine dish.  We really do.  But we just can’t.

Me, after having said Uncle.

One reason is that we still have to try the famous Schwartz’s smoked meat sandwich, which is 10 hot blocks away.

And arrive here at Schwartz’s “Charcuterie Hebraique.”  Hebrew Deli, if you will.

I’d read up about this.  We should order the Viande Fumee, with a giant dill pickle.  We did, but passed on the fries, and still ending up splitting the thing.  I was really glad we hadn’t tried to eat the Poutine too.

We were on a deadline to make the Montreal Jazz Festival’s closing night festivity: the Mardi Gras Parade.

We walked down a lovely pedestrian street, through a park to get to the Metro station.  Our initial impression of Montreal is that it’s just not that accessible, just not that much to really see here.  Or that we’ve seen better in other European cities and that what Montreal has is just a faint impression.

We knew at the outset that this trip was not the Big Ta-Da location of some of our other trips.  And there certainly is a temptation to compare this to places that remain in our memories and in our scrapbooks (like my comment comparing Marche Atwater to Lyon’s incredible street market–really it was unfair).  I think the incredible heat wave didn’t help us to “access” the city, for we retreated for several hours each day just to stay out of the heat–and those several hours might have given us a broader view of Montreal. However, it’s when we see a street–and a lovely little neighborhood park like this–that we realize how little we’ve really immersed ourselves in Montreal, that we have just skimmed the surface.  But it will have to remain that way, as tomorrow we leave.

We line up with billions of other Montreal-ans and tourists, awaiting the beginning of the Mardi Gras parade.  It gives us a chance again to notice the juxtaposition of the new and old Montreal, captured by a building’s reflection.

A fun little parade, with the slightly rowdy, carefree and less-pulled together approach that evokes Mardi Gras in New Orleans.  A pick-up truck pulling a float? Horrors!  You’d never see this at the Rose Bowl Parade–the Queen of Parades from our locale.  One interesting thing was listening to the woman next to me talk to her friend about when she’d gone to a jazz festival in Switzerland (?) and was listening to some musician famous for long sets.  She could leave and catch her train back to the city where she was staying, or stay and listen.  She stayed, fell asleep, and woke up at 6:00 a.m just as the artist as finishing his set.  The field, she said, was littered with people like her who had zonked out.  The group ended, she applauded, then got up to catch the 6:30 a.m. train.

The first necklace I got I gave to her, as she was a true jazz lover.  But we soon got others, as every pick-up was filled with cardboard boxes from China, full of garish beaded necklaces that we all screamed for and waved our hands to get.

I get to listen one last time to some pipers–wonderful.  They’re about the only ones in the parade who aren’t wearing necklaces.

I catch in silhouette a float bearing a likeness of a trumpeter, and then it ends.  We donate our garnered strands of beads to a little girl, and head back to our hotel.

1 thought on “Sailors and First Harvest”