(This is the first post of our trip to Croatia, Slovenia and Budapest in June-July 2014.)
Thursday, June 17

After a long flight from Los Angeles to Munich, and then from Munich to Dubrovnik, we were happy to see from our airplane windows the coast of Croatia.

Having viewed maps and photos and watched video after video, I recognized the walled city immediately and pointed it out to Dave, equally jetlagged and groggy.  We were happy to arrive after months of planning (car rental made in September of 2013, fully eight months earlier–this long-range planning would give us some troubles at certain points), and finally see that city that everyone is crazy about. 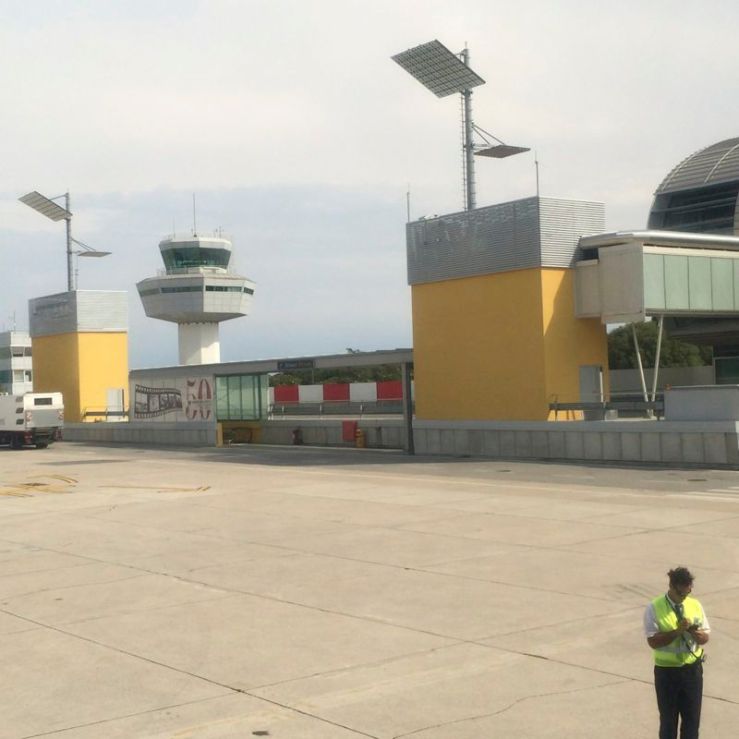 Our plane landed and they wheeled the exit stairs up to our plane.  We walked across a street to enter the terminal.  Given that we had to give the name of our firstborn child and submit to search, Xray and seizure in major city airports, the casual approach they took toward airline security (probably there, but just invisible to us) was interesting.  In the small terminal we found the ATM, bought our tickets and waited on the hot bus for a seemingly long time (probably only 15 minutes) before we drove into Dubrovnik, about 20 minutes away from the airport.  I thought the terrain looked like home–Southern California–with its rocky and sparsely vegetated hills; stands of flowers (hollyhocks and others) waved in the airport bus breeze as we rushed by.

No matter which weather forecast we looked at, rain was in our future.  We were just hoping to get in some good touristing before we were kept indoors, so were happy to see the sun.  “Sun!” we said, turning to smile at each other.  “Sun!” we repeated, like the babbling, sleep-starved and hungry tourists we were.  “Sun!” became the morning watch-cry, alternating occasionally with “Rain” (this one said with drooping shoulders, and search for the umbrellas).

The bus dropped us just outside the Pile Gate, an entrance to the west.  Clutching our printed directions, we were to walk the main street, the Stradun, turn right at some other street, walk past the named pizza place, find the green door (or was it blue?) and ring the bell.

Start by following the tourists. . .

. . .all while rolling our suitcases, toting our extra bag and never wiping the smiles off our faces.

The limestone pavement was shiny with use.  Nearly everything inside the walled city is pedestrian-zoned, where the tourists (sometimes up to nine cruiseship-loads, plus the rest of us) reign.  I did read that in the early morning, cars come in from the old Eastern gate making deliveries, but only once did we see a car inside the city, and that was branded with a TV-radio station logo.  A nice lady helped us make the correct right turn and on our second green door, we hit the spot.  (I never did take a photo of that door.)  The landlord met us, and as he huffed our two rolling suitcases up four flights of stairs, I found out that his wife’s family owns the building, his mother-in-law had the apartment across from ours on the top floor, that the lower part of the building was over two-hundred years old, and that I was going to hate going up and down the stairs every day.  We got settled, hung up some our clothes in the closets, and then went down four flights of stairs to find dinner. 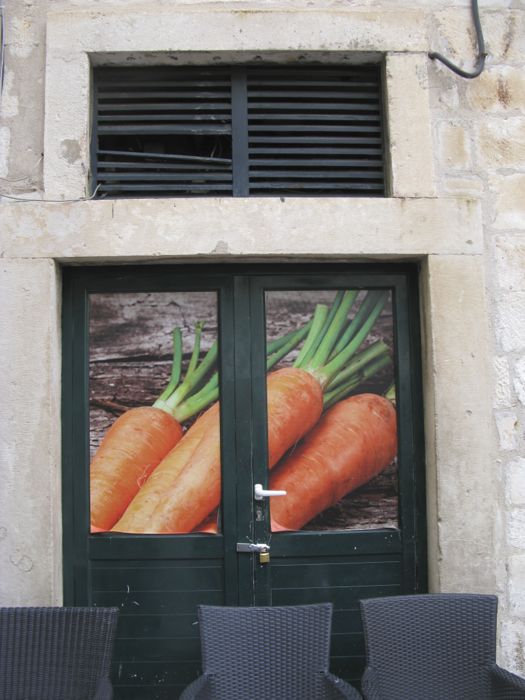 I have a predilection for wandering, especially in places where Dave is nearby so that we can point out (or take a photo of) the new and interesting, the unusual and the something-you-won’t-see-at-home.  Sometimes the identification of that last category is often followed by a “well, why isn’t it found at home?”  We take pictures not only to identify, but to capture the idea…and the moment.  These are age-old habits of tourists, and the new social media enhances this impulse with quick uploads to a photo-viewing site and a brief comment to provide some context: #dubrovnik #croatia were my most common tags on Instagram those first few days.  Often we were juggling both our iPhone and our regular snapshot camera, using each for their particular qualities. 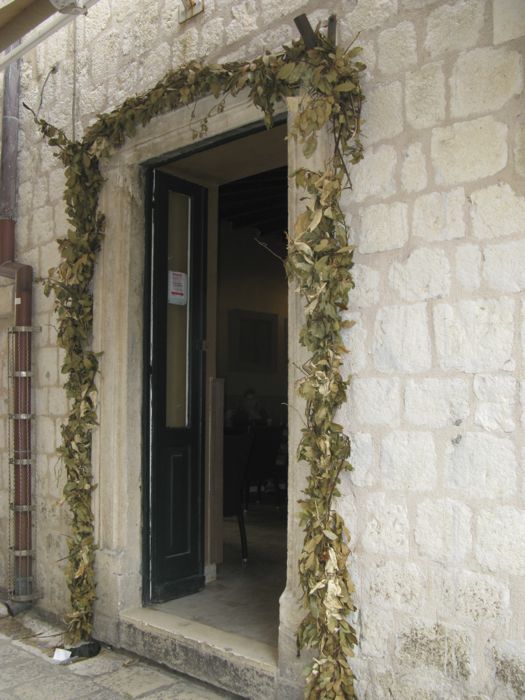 This doorway reminded us of Munich’s Ocktoberfest, only Munich would have live garland interwoven with blue checked ribbon.  I think this had been here all summer.  And that is another thing we do — relate what we see with our new, fresh tourist eyes to previous travel memories.

World Cup viewing.  Nearly every cafe in every square, and many restaurants, had a big-screen plasma television going just about 24/7.

Pred Dvorum street, which parallels ours.  Behind us is the Cathedral and on the right side is a museum and City Hall (under the arcade’s arches).

At the end of that street we enter Luza Square, anchored by St. Blaise Church. 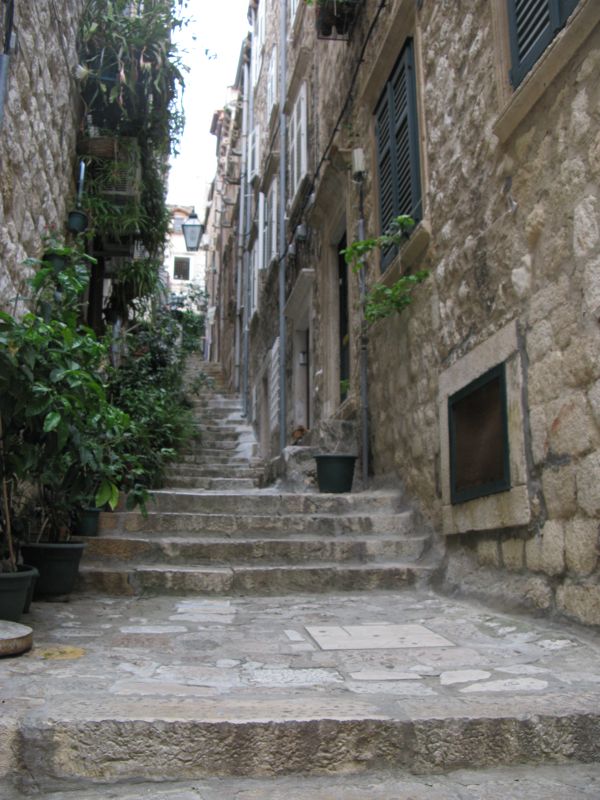 On a popular traveling website I’d written down some restaurant recommendations, and of course it was on the other side of this bowl-shaped town.

Looking down the steps back towards Luza Square.

We found the restaurant–under new ownership–so kept looking.  I know what you are thinking.  How could we pass up this place, tucked underneath this cute little church?  We did.

Behind us was the “restaurant” street, Prijecko Street, and it beckoned because Dave likes to explore several options before settling in to one place.  We call it the “restaurant street,” because we tended to give nicknames to locations, as we found the Croatian unpronounceable even though we tried to wrap our tongues around the words. 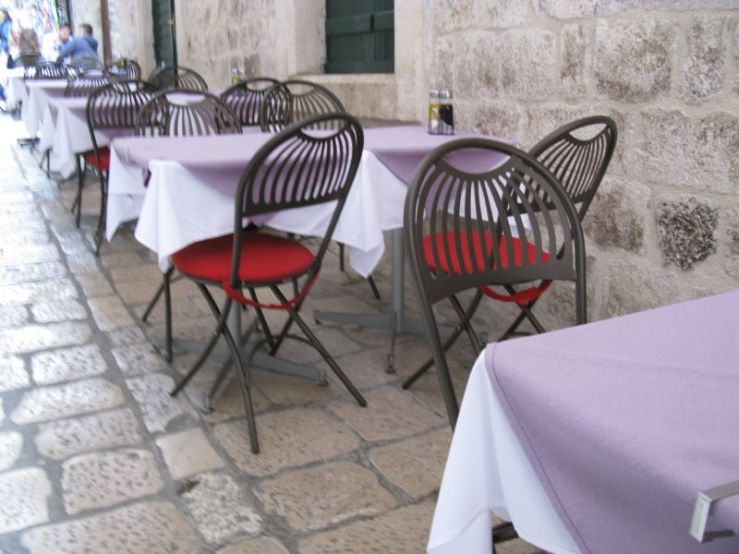 If we’d tried to sit and eat dinner here, we would have both fallen asleep. . . or eaten the cushions first.  I think this was more of a bar.

These musicians started at one of the street and kept moving along, looking for the big tippers.  We were still trying to figure out if we had the right kind of money, kuna, with 5.5 of them equal to one dollar.

One thing we dislike about Europe in general is their refusal to bring out tap water for our glasses. (This is how you learn that not every city in the world is like your city.)  The water has to be purchased and they charge tourists excessively for the privilege of having something to drink with their meal, if you don’t want a glass of wine (we didn’t).  One waiter tried to tell me that the water wasn’t good, especially after a rainstorm (right–and that’s why they let the tourists drink out of the fountains). But I took delight in the current logo being offered up by one water company, Jana, with their Croatian World Cup Soccer spirit.  The Croatian game, our landlord warned us, was to be played the next night–at midnight–and the pizza guy downstairs had already “invited the youths of the city” to come and join him for a wild and crazy party in the square below our windows.

“It will be loud,” the landlord warned.

We smiled and said, “How fun!”

Dave’s meal–a pasta with some kind of meat sauce.

My meal: prawns with lettuce garnish.  We demolished the bread basket, ate all of the garnish.  We also ate all of the shrimp but were less than delighted with the Mediterrean way of serving them with their shells on.  You have to work for your supper this way.  It’s always a challenge when ordering your meal in a foreign country, as often what you order bears no resemblance to what you think you’ll be receiving.  We sort of have a little contest determining which person had the better meal every night.  Tonight, Dave won.

Our sobe, or room, is marked on the map above with a blue circled X, just off Gundulic Square.  Stari Grad means Old Town.  We ate sort of directly above the black number 7 (above the “R” in Grad), on the restaurant street.  We didn’t feel like heading home, trying to stay up as long as possible to get on the new (+9 hours) schedule, so we walked the length of the restaurant street, where we discovered that pretty much every special at every restaurant was about the same as ours, and just as overpriced.  The street was narrow, filled with tables, first on the right side of the street and then on the left.  It’s one flight of stairs up from the Stradun, so down every side street we had views of the main street.  We were also walking, waiting until all the launches had carried the cruise-ship passengers back to their ships and the city emptied out.

There is an outer gate in the walls, and an inner doorway to the left side of this open area, a wide-open space which is perfect for impromptu art shows and musicians. 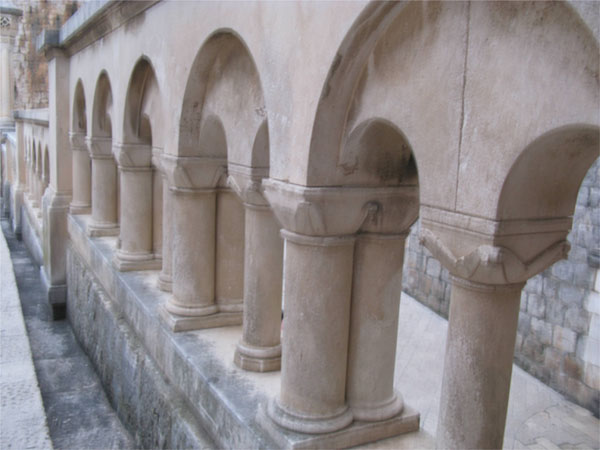 The double-columned balustrade reminded us of Italy.

Outside, there are small gardens flanking the walkway through the gate, with views of the Adriatic Sea and Boker Gate on the old City Wall (left).  The red umbrellas to the right of the photo are a restaurant, Dubravka, where we ate the next two nights. 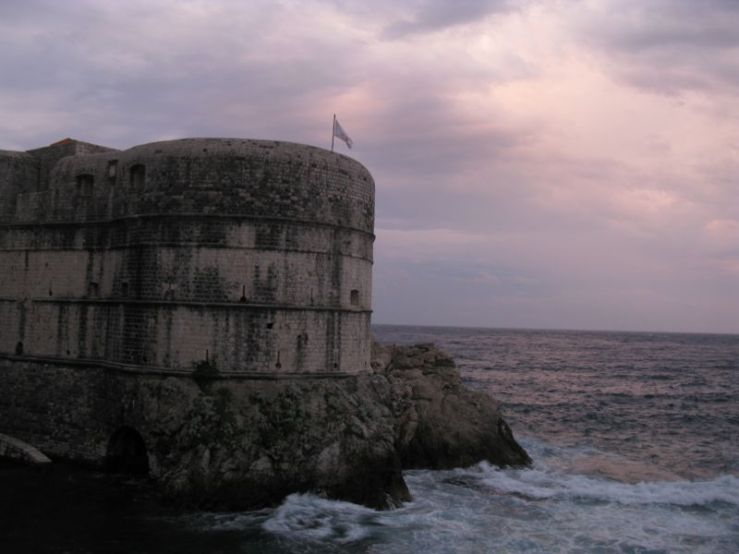 The tourist board has hired two young teen boys to act as sentries for several hours every night.  Young women liked to pose with them, and when no one was looking, they’d slump slightly on the top rail of the fencing.  A small statue of St. Blaise watches over them.  St. Blaise, according to legend, saved the town with his warnings that the Venetian Navy was set to attack the town.

Apparently if a young man can balance on this stone water spout while taking off his shirt, they’ll have good luck.  And a broken keister.  Dave thought stepping on it was good enough, and I agreed.

It was just outside this beautifully restive doorway of the Franciscan Monastery.  Everything looked calm in the waning evening night. 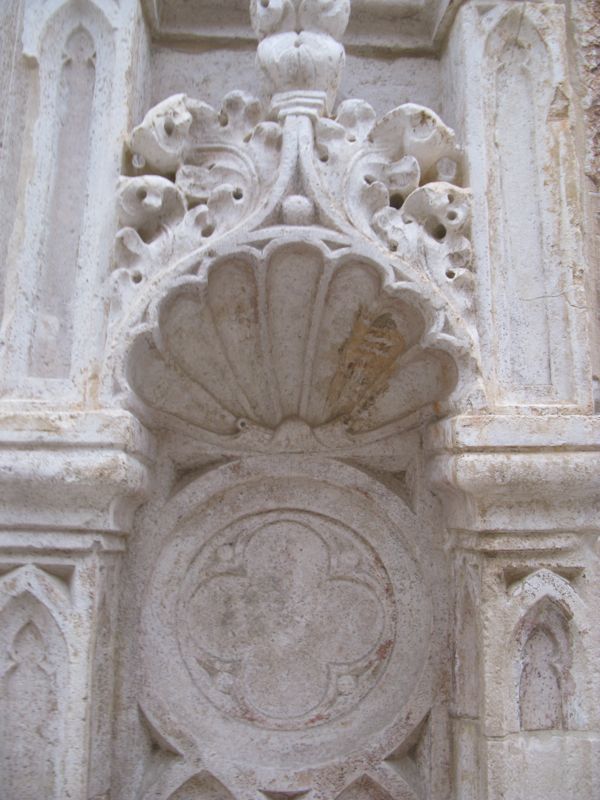 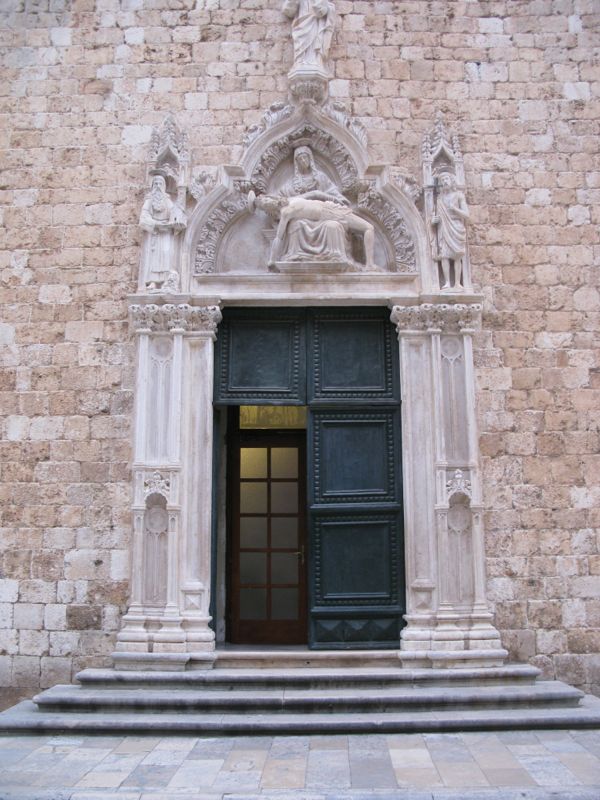 Right across from the Monastery is St. Onofrio’s Big Fountain.  All those faces have water pipes coming from them.  Twelve faces, twelve pipes.  Because the weather was always threatening rain (and occasionally delivered on its promise), the air was slightly muggy, yet we didn’t have scorching heat waves to deal with (where the water from the fountain would have come in handy).

Window shopping along the Stradun.  Braccialini had some interesting handbags. 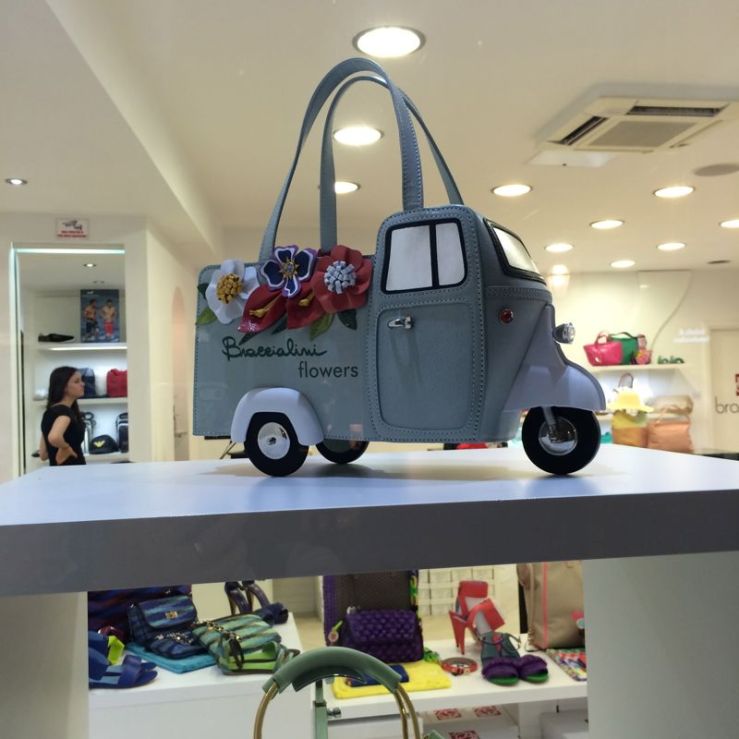 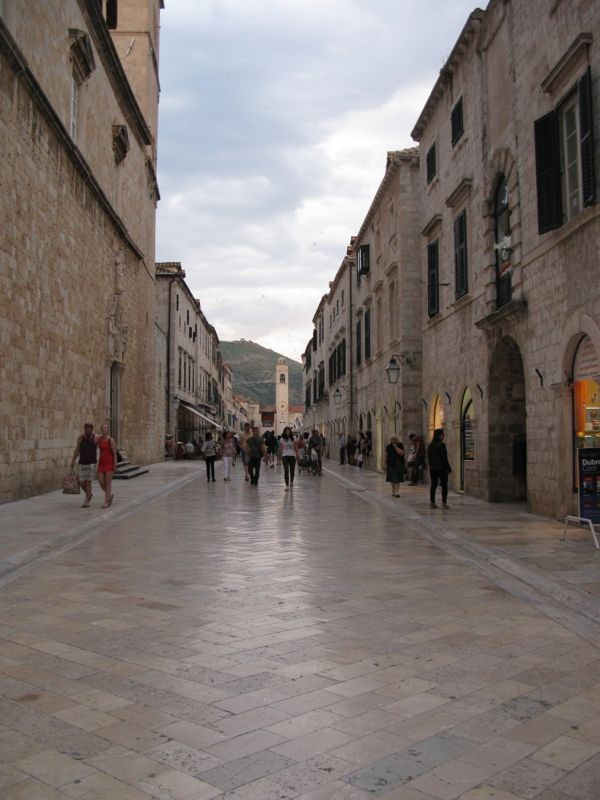 The light was starting to turn, the streets were emptying out and the fatigue of the journey was beginning to hit hard.  Just a few more minutes, we thought.  We ducked in and out of gelato/ice cream shops without buying any, saw red-checked item after red-checked item (the red checkerboard is a centerpiece of the Croatian flag), people watched.  And then that amazing European cerulean sky crept in over the city, making it all seem bejeweled and sparkling. 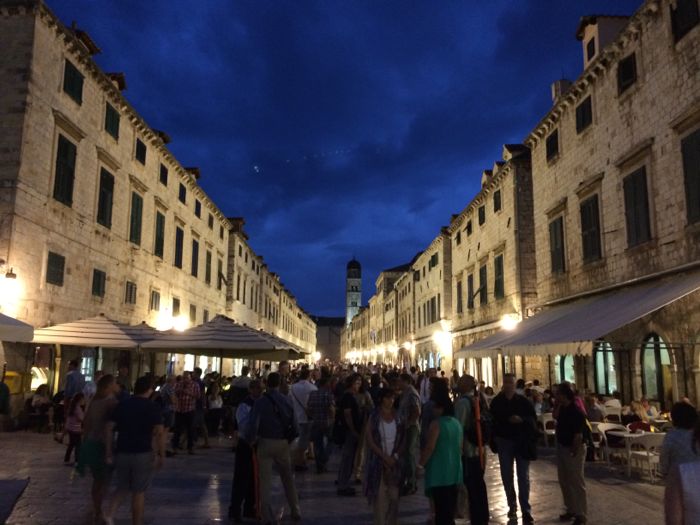 The people start to gather: to eat dinner (more tables have been put out on the Stradun, umbrellas and awnings raised), for drinks, and to watch World Cup games.  And to wander, just like us. 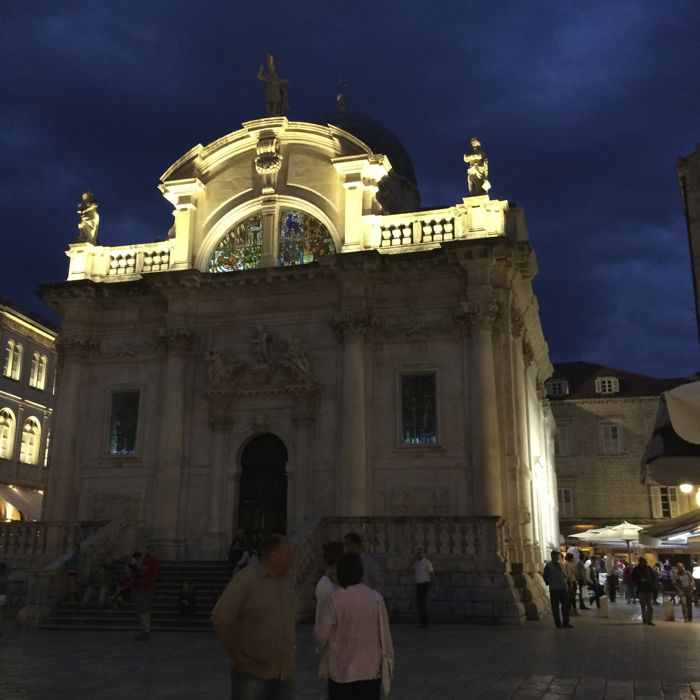 The Church of St. Blaise at night. 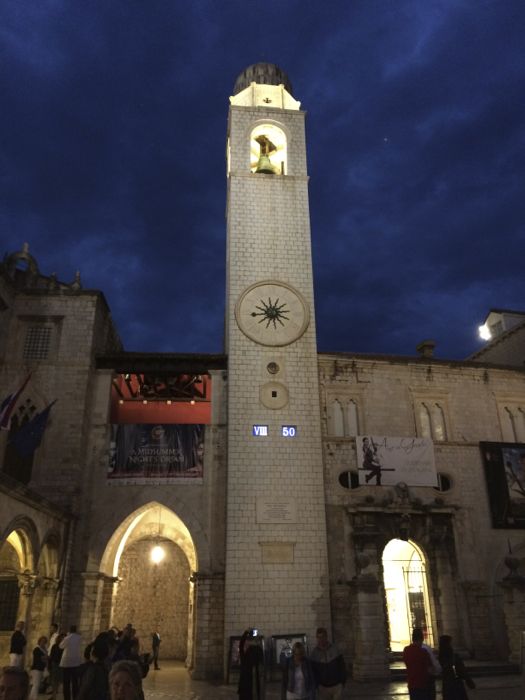 The bell tower clock dial reflects only the hour, reiterated below in the left window by the Roman Numeral.  The right window gives the minutes, but only in five-minute increments. 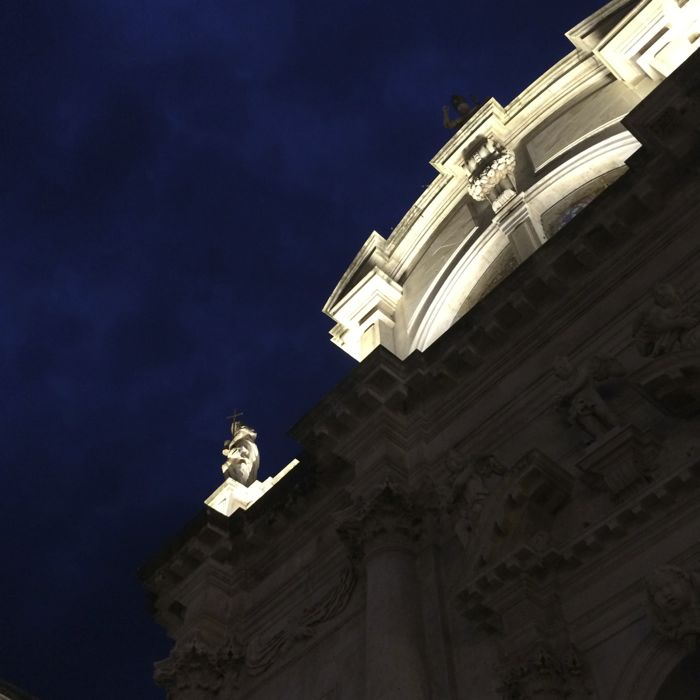 We leave the crowds under St. Blaise and climb the four flights of stairs up to our sobe. 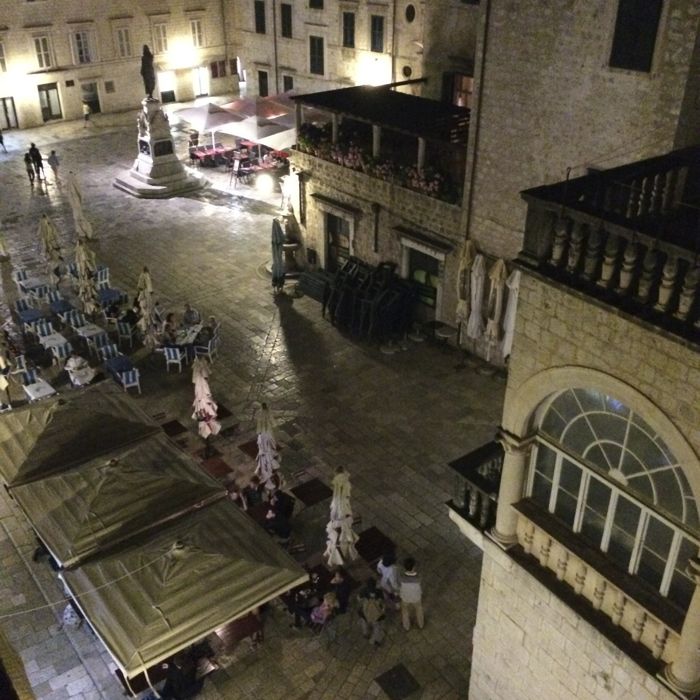 One last look out the window, into Gundulic Square below.  We leave the windows open to catch the cool air, and call it a day.