This is post #5 of our Dublin-Berlin trip in September 2018. 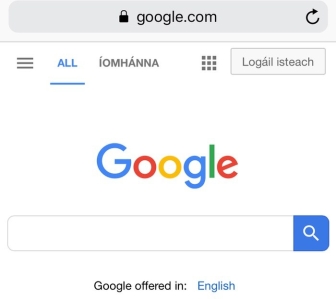 I have a reminder that I am in a different country, whenever I pull up my phone and there is a different language on my screen.

I woke up this morning thinking Happy News!  That’s the last time I’ll ever have to sleep in that bed (or not sleep, as the case may be).

Yesterday afternoon (Friday), we’d decided to come back to the National Gallery of Ireland, when browsing through their book shop for 15 minutes just wasn’t enough.

Dave wolfed down his breakfast, while we stood a few doors away, in front of this interesting building from the past: Pure Chemistry. 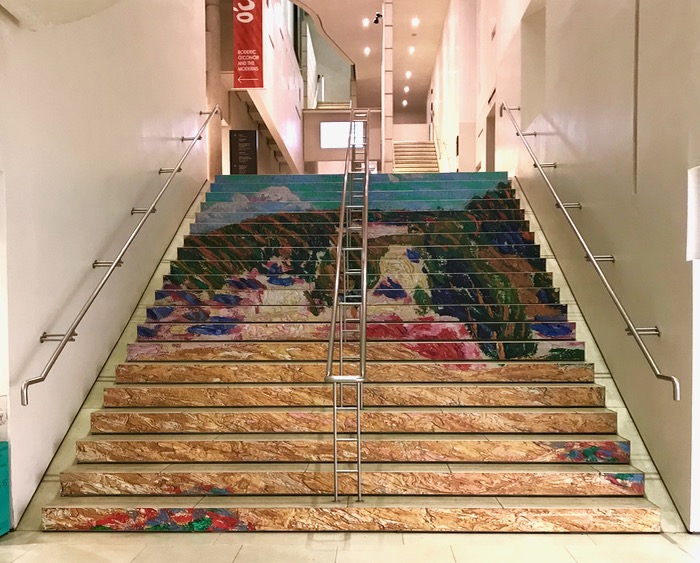 The stairs up to the exhibit of Roderic O’Conor and The Moderns.  Of course, no photos were allowed, so the following are culled from the web, by doing a search on his name: 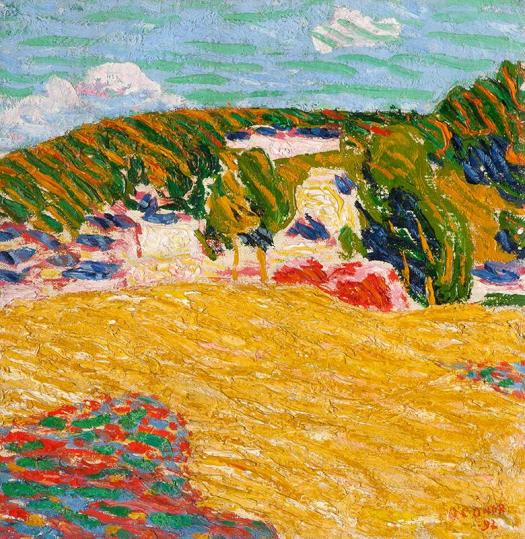 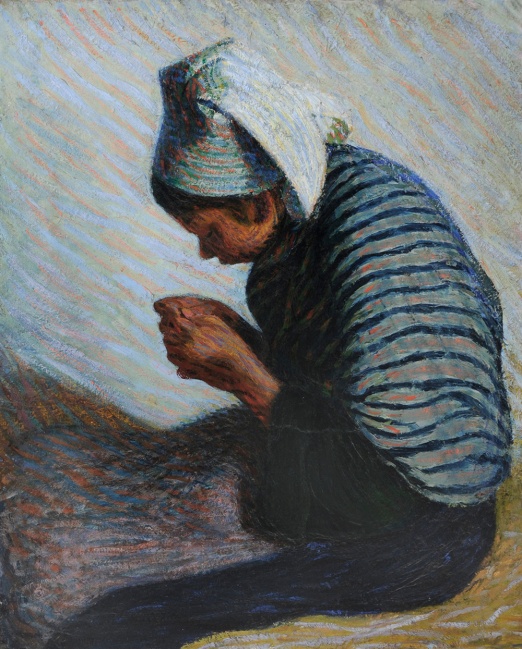 The painting notes emphasized O’Conor’s use of stripes to color the shadows, give dimension to his work, and the influence of Gaugin in his use of bold color.  I loved one of the quotes in the title cards:

“Remember that a picture —before being a battle horse, a nude women, or some anecdote – is essentially a plane surface covered with colours assembled in a certain order.” Maurice Denis, 1890 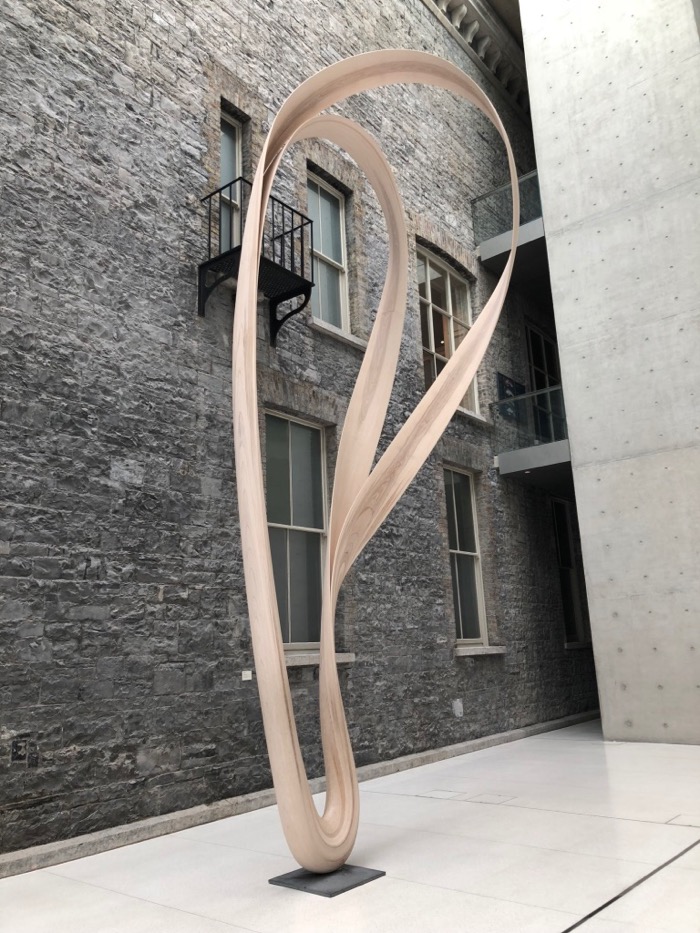 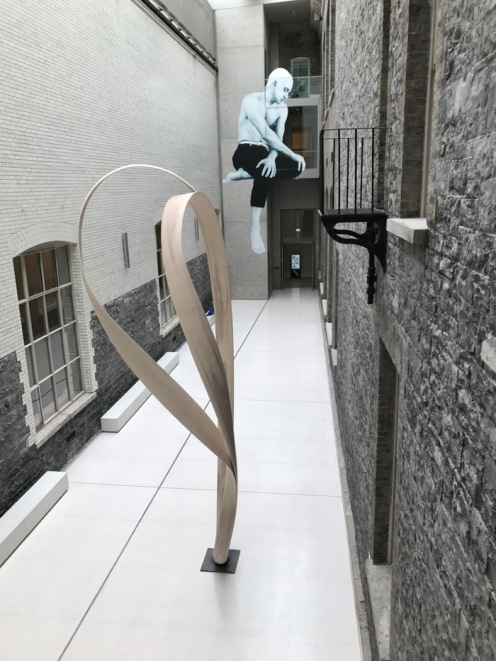 However, once we crossed into the atrium between the old space and the newer space, we could photograph, enjoying this wooden sculpture. 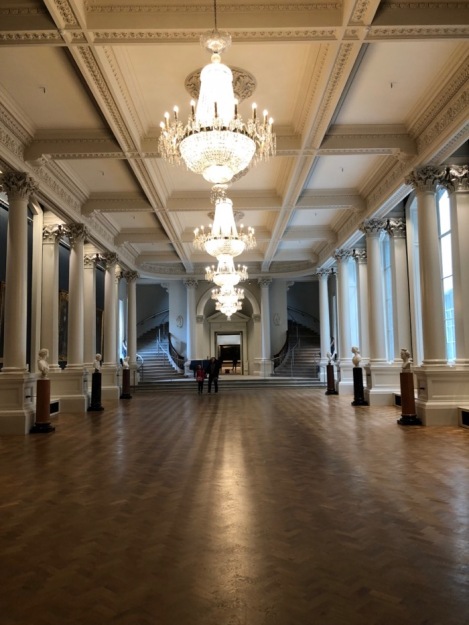 This wing was constructed from a Georgian Terrace House, and the planning board asked that they leave the basic construction inteact.  When you walk in, you wonder what kind of lives were lived here, and you have the sense that you are guests in a very grand house. 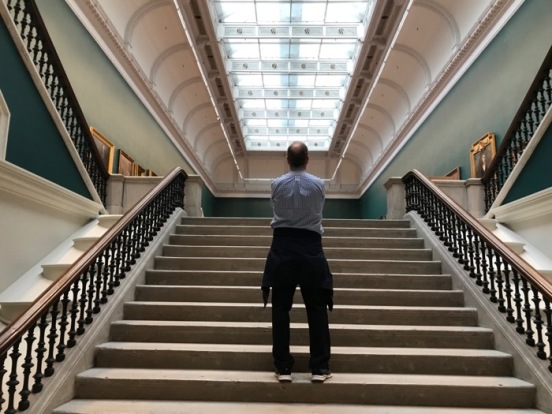 One of my favorite shots. Photo by Elizabeth.

We are sprinting through the galleries, sorry we don’t have more time to spend, and even though we asked for an hour extension on our hotel check-out, it still didn’t give us lots of time.  Next trip.

Back to the original gallery, down their stairs.

We brought a few things home from the gift shop, but these stockings stayed there.

In a strange land, even the mundane catches your eye, like this tiled stoop, which matched the gray sky.

We head back to Sprout for a repeat bowl meal. 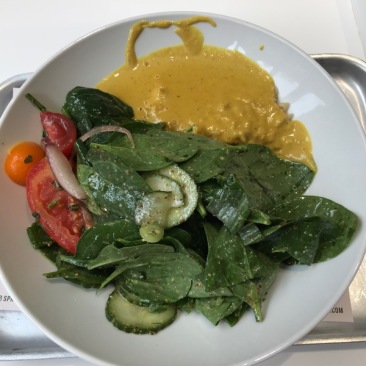 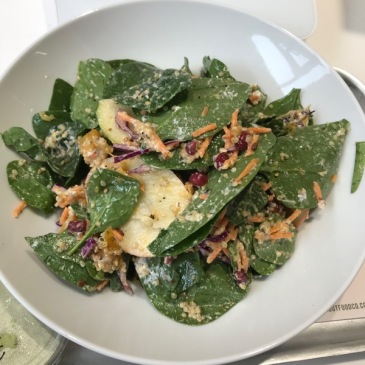 Mine was “Sataysfied Turkey Bowl.”  I believe Dave had “Superguacabowl;” the guacamole was on the side in a little container and did NOT look authentic.  But the color was right for this country. 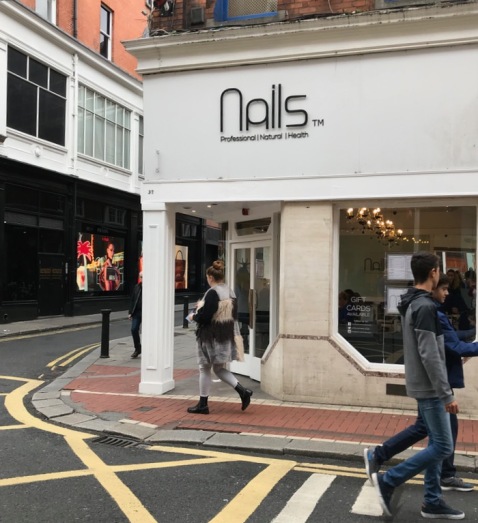 Another one-word shop title.  We check out, then spend a couple of hours in their basement, where the check-in desk is located.  I decide to wander a bit, leaving Dave to mind the luggage. 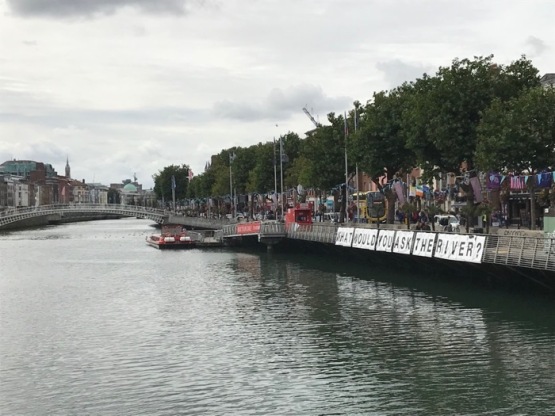 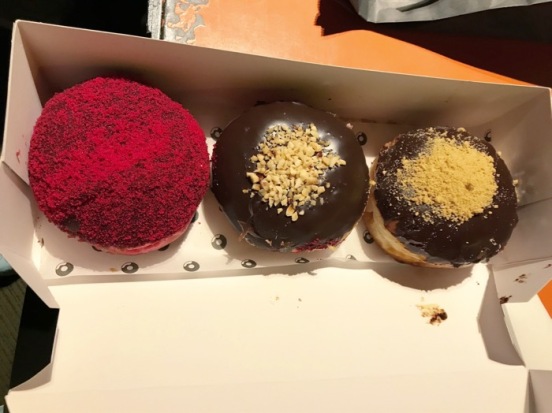 I wandered over to the donut shop, and got three to go.  (They went.)

We caught the express airport bus this time, and as we slugged our way to the airport, saw one last one-word shop: Schuh. 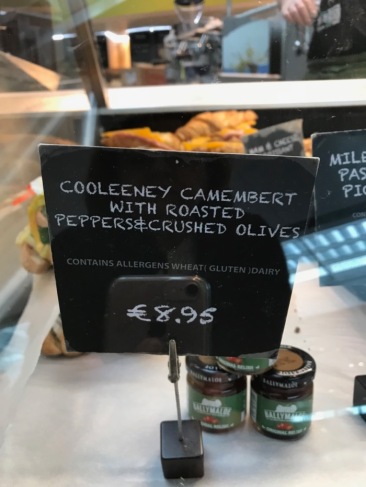 Our flight was at 5:55, so we tried to grab some food from the Dublin airport, knowing that Aer Lingus was considered a bargain airline, I doubted we’d get any free food on board (I was right–they even charged you for the water).  This food court was upstairs, a convenient area to wait for the gate to be announced. (The catsup was in those little bottles in front.)

And the plane has landed, refueled, so we’re off to Berlin.

And a couple of hours later (and one time zone shift) we land.  As is usual for European airlines, they put you on the ground in the new country, bragging that they were “early,” but you have to schlepp off the plane, get onto a bus, driven over to the terminal, thereby getting you to the baggage claim, etc. waaaay later than if you’d just waited and parked at a gate.  I’ll never understand this logic.

I sat by a young woman who was flying down to see her boyfriend run in the Berlin Marathon the next day.  We had a great conversation on the plane, about those things you talk about with strangers: her lack of divorce (complicated Irish law), how her children are doing with the father moved out of the house (fine), how she met her boyfriend, and how she voted in the recent Irish referendum on abortion (yes).  She did all this while painting her fingernails a bright glorious pink.

Unusual to see profanity on a sign.  I know there a lot of English speakers here, so I assume they know what they are putting up there.  The German phrase translates out to “The first bank you will love.”  We grab a taxi and after 25 winding-around minutes, he pulls up to the door of the Movenpick Hotel, where we are greeted by a competent young clerk name Lina, who I became friendly with.  I’d called from the States a couple of nights previous to our trip, asking for a good room, since we’d be there so long.

Our room was wonderful, and I thanked her every time I saw her. 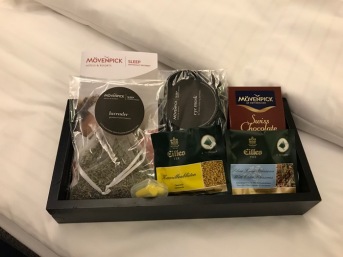 It was wierd to have a glass-walled bathroom, but really the privacy level was okay, and if you wanted more privacy, you left the lights off.  We are hopeful for a good night’s sleep after seeing this on our nightstands: 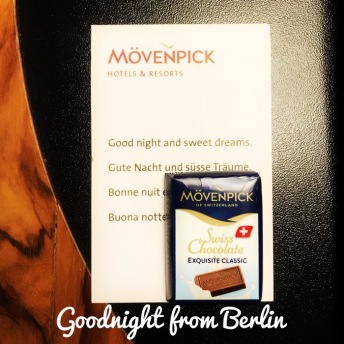