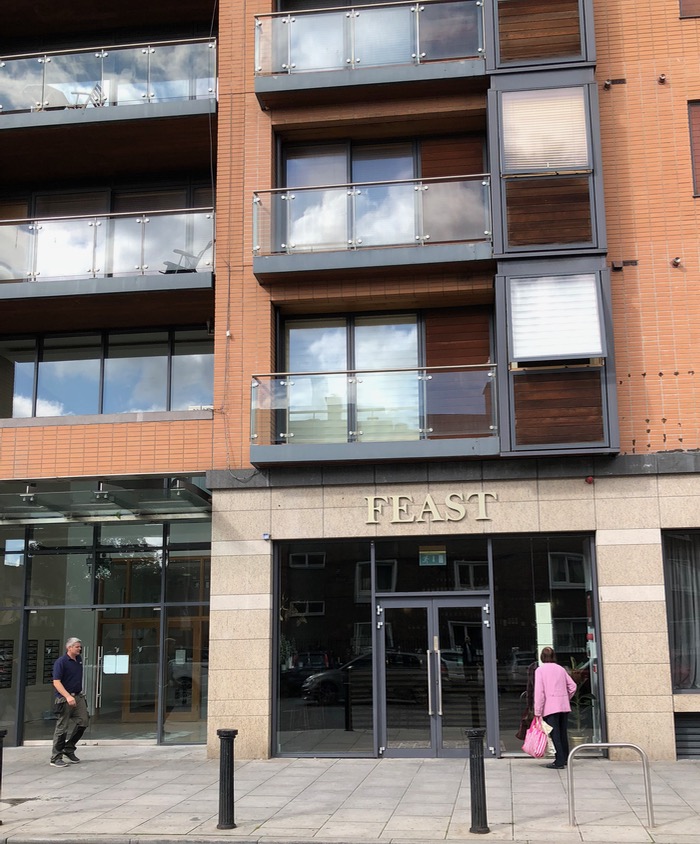 The title comes from a moment late in the day, when exhausted, weary, and tired of sight-seeing, we decide to bust loose from our agenda and just do what we want, see what we want.  It’s often this push-and-pull for me: See All The Sights! often dominates, whereas Enjoy Your Travels and Discover, often takes a back seat. So we think there should be a guidebook with this title, as often that’s when you have the most fun, even though you may “miss” some of the “important” things in a city’s checklist.  Today we tried to balance out the both.

Because of pathetic night’s sleep, we didn’t get moving until nearly lunchtime.  We’d made reservations at Boxty’s for lunch on Saturday, but decided to see if they could accommodate us for lunch today, Friday, then we’d “get that out of the way.”

They could, and we started our day with a small bowl of Traditional Irish Lamb Stew and Soda Bread, and a Corned Beef Boxty. 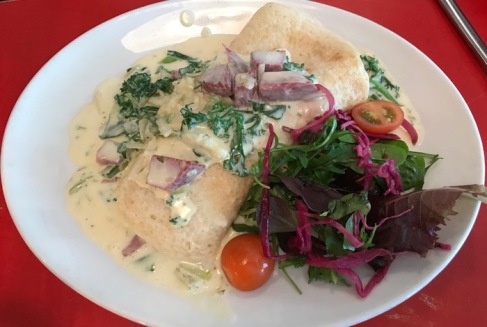 What is a boxty?  A pancake, for all practical purposes.

We headed out the usual way, trying to get to St. Patrick’s Cathedral, but detoured onto a little curved street, where we saw City Hall, and decided to check it out.

Dave always goes for the dome in the ceiling. 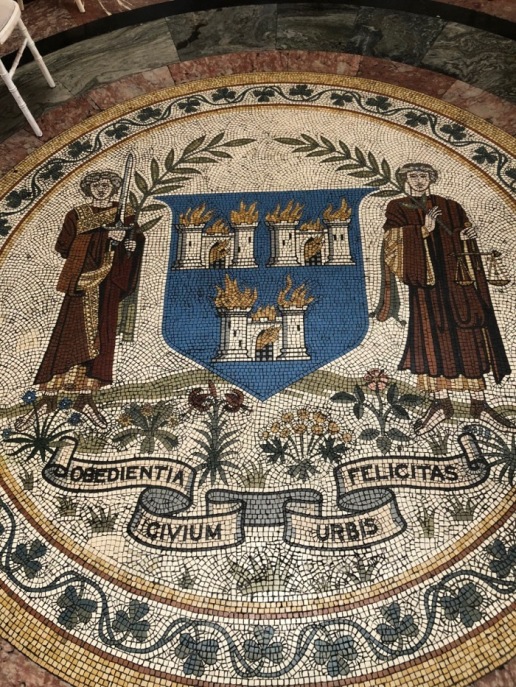 I always go for the tiled floors.  There’s some sort of message in this, but I can’t think what it is.

I loved this little scene, right behind the ticket-taker at the door.  We get a “concession” or discount on the ticket price because we are of a Certain Age.  Getting a discount always makes Dave happy. 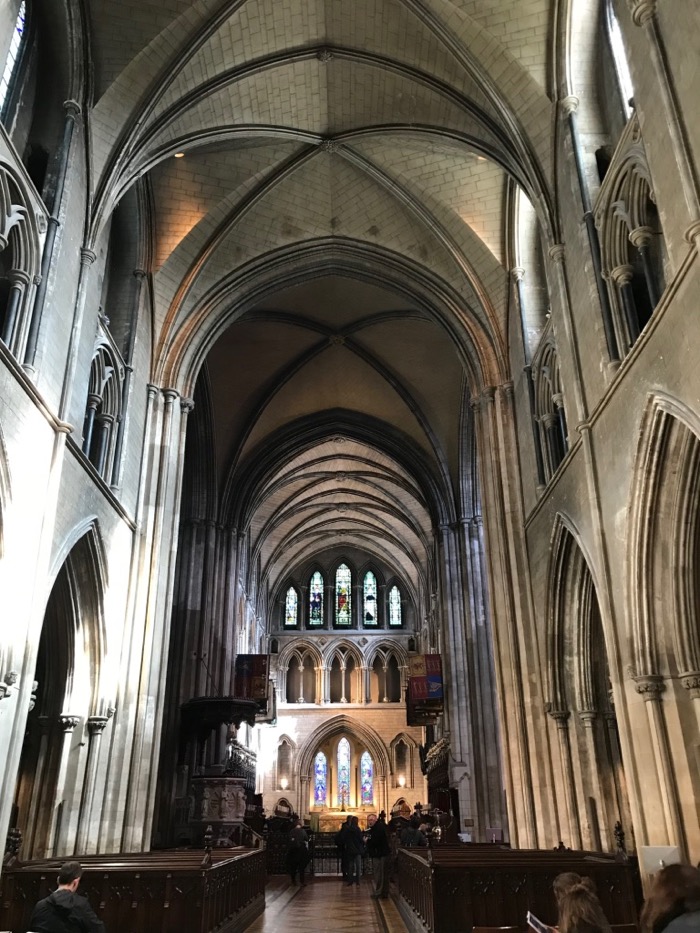 Another big vaulting nave, and although there is nothing “special” about this Cathedral, it does have some interesting features.

When old military regiments are disbanded, their flags are sent to this cathedral to hang until they disintegrate and fall to the ground.  Then the flag remains are placed in a display case and hung on the wall.  The St. Patrick Cathedral website notes that “Saint Patrick’s Cathedral began receiving regimental colours in the 1850s and these represented Regiments who had fought in the Napoleonic wars. Throughout the 19th and 20th centuries more flags were laid up (added) in the Cathedral and this tradition continues today.”

The decaying flags are hung in a side chapel.  The ones you see here, along with their helmets and swords, are those of the Knights of St Patrick. Click the link to read more about them and their connection to this cathedral. 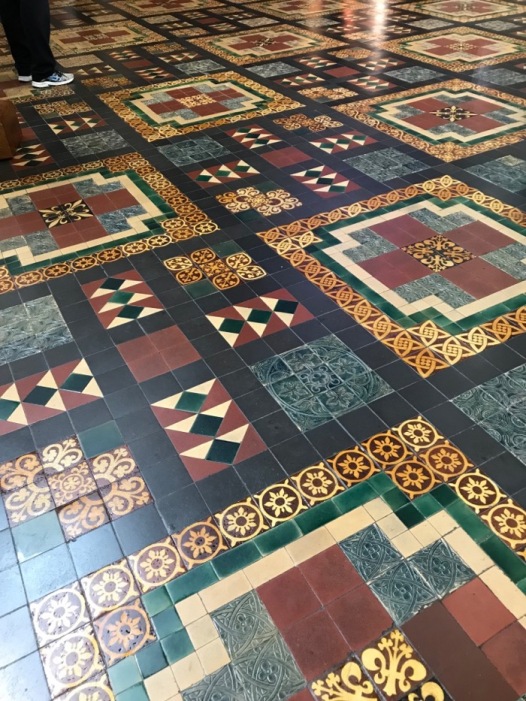 These tiles are from a renovation by the wealthy brewer “Benjamin Lee Guinness [who]  wrote offering to underwrite a complete restoration of the building, the only condition being that he be subject to no interference: the project took five years and cost £150,000. One of the alterations made by Guinness was raising the floor of the nave to the same height as that of the choir. In the process, new tiles were laid down, of which these are an example, based on medieval designs and covering the entire nave.”  from here

Needlepoint cushions for the seats.  My eye was caught by the Wexford design.  We saw similar ones in the National Cathedral in Washington, D.C., but they were stitched honoring notable people from the area.

Jonathan Swift is buried here, along with his companion, Stella.

The fact that Swift is buried here helps these medallions on these neighboring housing units make more sense.  On the unit above, you can see the main character of Swift’s novel, Lemuel Gulliver, tied down by the Lilliputians.  There were several housing units in this development and several medallions depicting scenes from the novel, such as when Gulliver was instrumental in a sea battle.

Two more businesses with one-word titles: Feast and Pure. Pure is a styling salon for women. 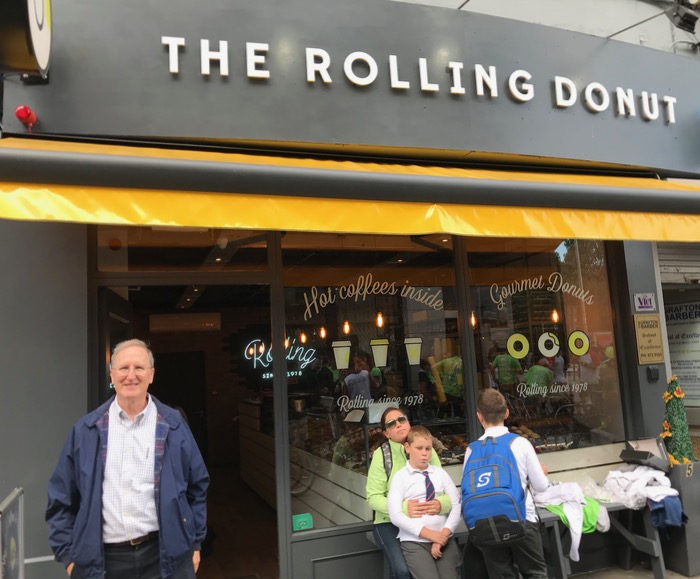 We were headed to St. Stephen’s Green and Butler’s Chocolate, but encountered this donut shop, which by now was my favorite of all the shops I saw.

Perfect afternoon pick-me-up, complete with “red velvet soil.”  Verrrry glad there is nothing like this in the States. But our original errand was to head to Butler’s to try their White Hot Chocolate, and that was just across the pedestrian shopping street, along with another busker/musician:

Holding the white hot chocolate at the Fusilier’s Arch, St. Stephen’s Green.  We found a bench, and sat, taking turns sipping the beverage. 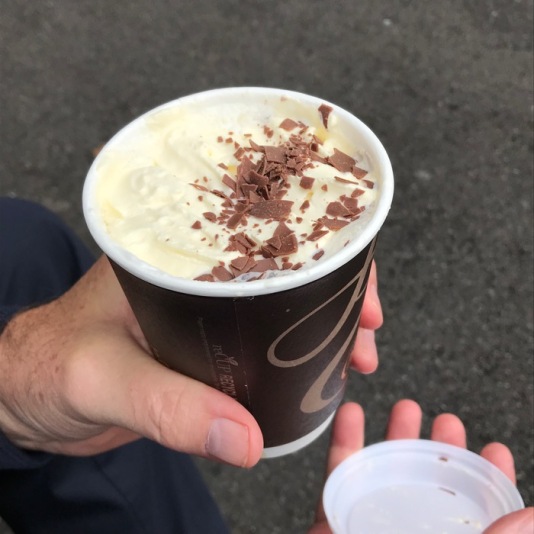 It reminded Dave of warm, sweet milk, with a slight undertone of chocolate.  Agree.

This young girl was mobbed by the gulls, as she held a crust of bread.  Then all of a sudden they flew off over our heads in a great cawing and rush of wings.

One of the interesting things about travel is how one experience overlaps another.  Sitting on the bench in the green reminded us of the day we were in Halifax, Canada, waiting for the restaurant to open where we were to eat.  We had an hour to kill, so headed to a park, talking and taking a breath in the travel rush.

Leaving the Green, and walking north along Merrion Square Upper lane, Dave caught this shot of a massive set of something governmental looking.  A commenter on Google Maps said that “This complex of Government Buildings situated on Upper Merrion Street, Dublin is where the government ministers and staff have their offices. It originally housed two government departments, the Local Government Board and the Department of Agriculture and Technical Instruction.”  Apparently you can take tours of it.  Next trip.

We were headed to Merrion Square because I’d heard there were great doors to look at there, but we had fun goofing around in the park, finding this chair which was a tribute to  Dermot Morgan.  I said to Dave that he can put one like this in the local university botannic garden for me, and I’d be happy.

How about this for a Christmas Card photo, sneakers and all?

When we were on the airplane on Aer Lingus, the flight attendants would come down the aisle at the end of service asking for “Rubbish?”  or “Waste?” where we usually hear “Trash?” on American flights.  Here’s a litter box, all fancy-style, in the park.  I think we usually still use the one word, “trash.”  Interesting that there are three words in their vernacular to our one.

Even though there was no rain expected/predicted, it’s raining now, so we scurry over to the National Library of Dublin, because I’d seen photos of the Reading Room (below) and I wanted to see it.  Of course, photos weren’t allowed (privacy for those in the Reading Room) and no postcards, either, so I took this one from the web.  I think I want to repaint my house in these colors. 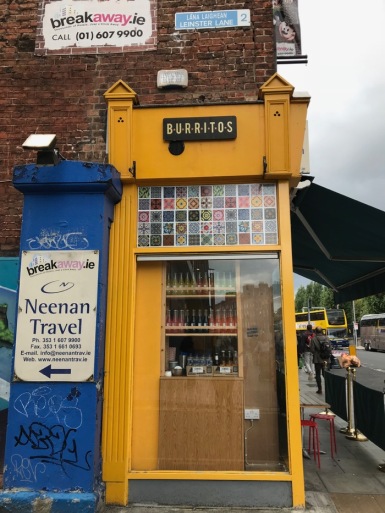 We walk back to our hotel, dodging under doorways. The rain let up a bit.

We never could figure out the bus system in Dublin, thinking instead they keep it away from the tourists, so only the locals can use it.  I do like how the last guy on the bike, in the green, is looking at the portrait.

Dave wanted to eat dinner where he could listen to some traditional Irish music.  O’Flaherty’s had three levels, and the guy receiving patrons politely guided us downstairs (where the old folks and the kids were dining), but we did have a good view of the stage with the two-piece band, and the dancer, when she’d come downstairs to do a bit of Irish dancing.  I also had the biggest piece of Fish n’ Chips I’d ever seen (Dave had to help).  He had Irish stew. 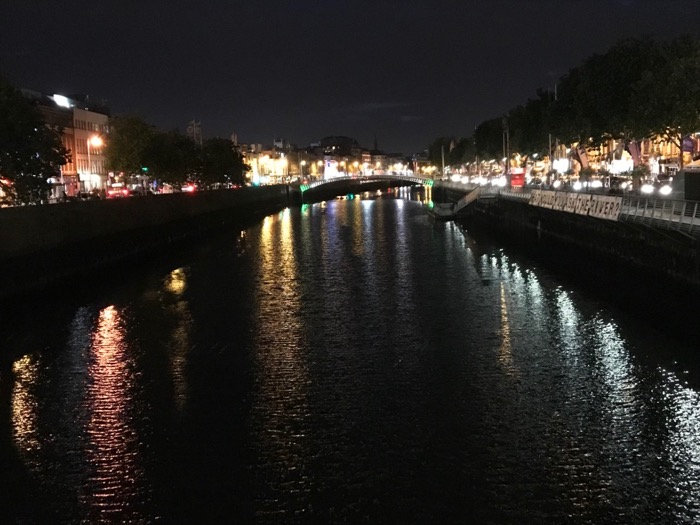 A last walk up onto O’Connell Bridge to see the lights.

1 thought on “Dublin: Messing Around in the City of Your Choice”